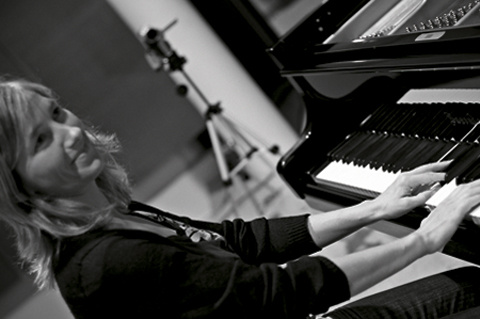 Sunna is equally influenced by American pianists Bill Evans and Keith Jarrett as well as Scandinavians such as Bobo Stenson, Jon Balke and Jon Balke. She has found a way of making music that people from both sides can relate to. Sunna’s charming style of romantic lyricism, soaring above a driving American rhythm section, appeals to both jazzers and non-jazzers. Growing up on Seltjarnarnes, a small peninsula not far from Reykjavik, she took lessons on the organ as a child. As a child, the idea of playing the piano was not appealing to me. It was associated with the boring, classical pianists I admired. You could play any music on the organ, including the Beatles, Strauss, polkas and Strauss. After realizing that the piano could play many different music, she was in her teens and it was the gift of a Bill Evans trio album (aptly named “You’re Going to Hear from Me”) that drew her to modern jazz. As a student at William Paterson College in 1993, she moved to the USA to develop her musical talents as an improvisor as well as a composer. She also studied the classics and learned from the masters. Inspiration was easy to find, as it was only a 15-minute drive from Manhattan. It was an amazing experience to suddenly be able to go the Village Vanguard or Bradley’s on any night of week and hear incredible pianists. It was such an inspiring environment that Gunnlaugs didn’t intend to leave after she graduated in 1996. With her trio of bassist Dan Fabricatore, Scott McLemore (her future husband), she made her debut album “Far Far Away”. Her focus in New York shifted to singing her own music. Her appearances at listening rooms like Cornelia Street Cafe or the Knitting Factory received rave reviews. Village Voice called Gunnlaugs an “impressive newcomer”. But the music she was creating required more than a trio. “The sound of the Keith Jarrett quartet, Jan Garabrek and Bobo Stenson had appealed to me a lot. Drew Gress and Tony Malaby were both available to assist her. Tony was a familiar figure to me from his bands, and I was blown away by his expressiveness. Drew was someone I knew from his work as a guitarist with Fred Hersch, Dave Douglas. His music was always full of life and he kept it open. McLemore and the quartet recorded Mindful in 1999. They also recorded Songs from Iceland the next day with some time remaining. “Mindful”, which was chosen by McLemore as one of the best 10 CDs of 1999, was as personal as an artist could make. The listener can tell that something special is in the air from the first note of the duet with Malaby. From the beginning to the end, there is a joyous buoyancy mixed with ethereal melancholy that envelopes you. The same atmosphere is present on “Songs from Iceland”, and Gunnlaugs’ relationship with the material, five Icelandic folk songs, is just as intimate. These were songs that we played on concerts and I suggested that we record them for posterity. Although I was unsure what to do with them, it felt important to record them. Nearly a decade later, “Songs from Iceland”, a compilation of Icelandic folk songs, was released. Jazziz recommended it because her “unique combination of jazz piano” and Icelandic folk music is “great to listen to.” Sunna also released two albums in the interim. The first was 2002’s Fagra Verold (music written to Icelandic poetry), which featured Gress and McLemore, as well as Sigurdur Flosason and Kristjana Stephansdottir as vocalists. The second was 2003’s high-energy album “Live in Europe”, which reached the top 10 in jazz charts in the US and Canada. This recording was made in Prague during a three-week European tour with Ohad Talmor, saxophonist, and Matt Pavolka, bassist. Gunnlaugs loves touring and has performed in the US, Canada, Europe, Japan, and Tokyo. “I love traveling by train in Europe. It allows me to relax and reflect. It’s quite different from driving in the US in a minivan. You never know what you can expect when you travel. One time, we had to squeeze our upright bass into a small boat that was only able to carry us to Vancouver. You also get to see small towns you wouldn’t normally visit as tourists when you go on tours. She has been praised for her 7 CDs as a leader. Her appearances in publications like JazzTimes and Jazziz, Jazz Podium and Concerto, Stereo Jazzman, Village Voice and Time Out New York have all been positive. Her last album, “The Dream”, (featur-ing saxophonist Loren stillman, bassist Eivind Osvik, and drummer Scott McLemore), jumped to #2 on Canadian jazz charts, and to #20 in the US CMJ charts. This adds new perspective to Time Out New York’s assertion that Gunnlaugs “proves that jazz is as important as pop music.” She currently lives in Iceland and performs with her trio, which includes bassist Thorgrimur Jonsson, and Scott McLemore. Her 2012 plans include touring the US, Canada and Europe with her Icelandic trio. from http://www.sunnagunnlaugs.com