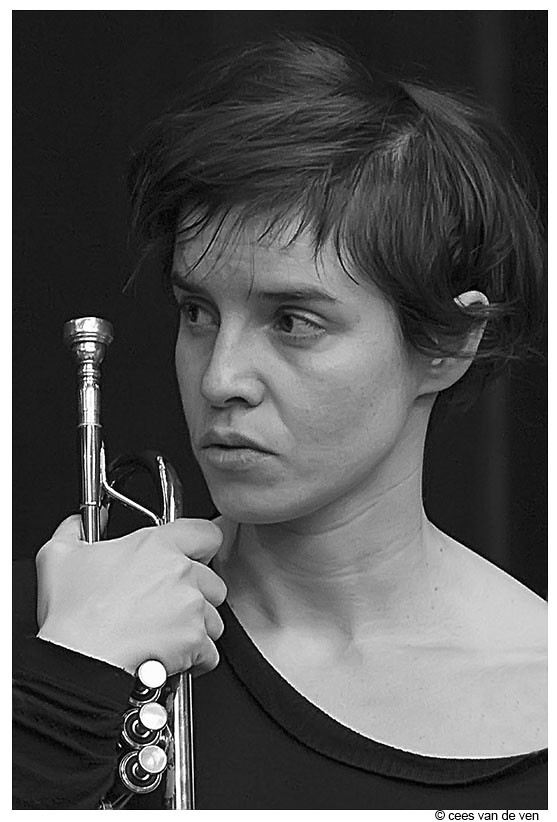 Susana Santos Silva, a trumpeter, composer, and improviser from Porto (Portugal), is the author. She is a graduate of Codarts Rotterdam’s Master Diploma in Jazz Performance 2010. There she worked alongside Jarmo Hoogendijk, Eric Vloeimans and Wim Both. She has a Graduate Diploma of Jazz/Trumpet u0026 Trumpet ‘2008 from College of Music and Performing Arts, Porto. She also attended the final year of the course at Staatliche Hochschule fur Musik Karlsruhe, where she had baroque trumpet lessons alongside Prof. Edward Tarr. She is co-founder and member of Porto-based jazz musicians association Porta-Jazz, as well as its label Carimbo. Coreto was part of an ensemble that included musicians from the association, Joao Pedro Bandao. They recorded the first album for the label in 2012. Two more albums were released in the following years, ‘Mergulho and ‘Sem Chao. She releases her debut album, ‘Devil’s Dress’, as a leader of her Quintet on Tone of a Pitch Records in 2011. She performed with this band at the 12 Points Jazz Festival in Dublin, 2011. She released her second album, “Impermanence”, on Carimbo Porta-Jazz in 2015. Lotte Anker, Sten Sandersell, TorbjornZetterberg, Jon Falt and Life and Other Transient storms are her new projects. Their new album is out on Clean Feed Records. LAMA, her Rotterdam-based trio featuring portuguese bassist Goncalo almeida, and Greg Smith, is one of her main projects. Chris Speed feat. Joachim Badenhorst (2015) was released on Clean Feed Records. This includes a duo featuring the Swedish bassist Torbjorn Ziterberg, Almost Tomorrow’ Clean Feed 2013 and a duo of the slovenian drummer Jorge Queijo – ‘Songs From My Backyard’ Wasser Bassin 2013. A trio with Torbjorn Zoetterberg and Hampus Lindwall – ‘If Nothing Else Clean Feed 2015; a quartet with Christine Wodras Svendsen Berre, Christian Measen Svendsen Svendsen Svendsensen Svendsensensensen! (Barefoot Records 2016). Joao Guimaraes Octet, Torbjorn Zietterberg ‘Och Den Stora Fragan’ Moserobie 2014 and ‘Om Liliv!