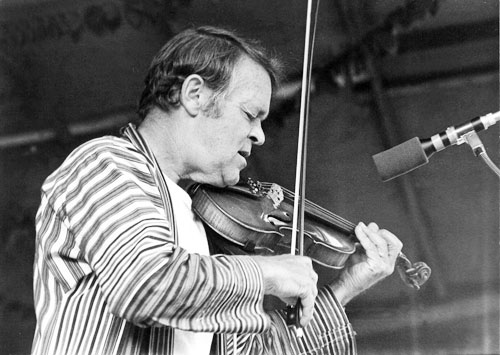 Svend Asmussen, 28 February 1916 – 7 Feb 2017, was a Danish jazz violinist who is also known as “The Fiddling Viking”. He was a Swing style virtuoso and played and recorded with many greats of Jazz including Benny Goodman, Duke Ellington and Stephane Grappelli. His career spanned eight decades and he played public until 2010. Asmussen was raised in Denmark and began lessons in violin at age 7. Asmussen was 16 years old when he heard the recordings of Joe Venuti, a jazz violinist. He began to imitate his style. At 17 years old, he began his professional career as a vibraphonist, singer, and violinist. He worked on cruise ships and in Denmark with artists like Fats Waller and Josephine Baker early in his career. Stuff Smith was a significant influence on Asmussen’s later life. He met Asmussen in Denmark. Asmussen was a member of Valdemar Eiberg’s and Kjeld Bonfils’ jazz bands during World War II. Jazz had become underground during this time and served as a form for political protest. Asmussen, Alice Babs and Ulrik Neumann formed the group Swe-Danes in the late 1950s. They were well-known for their music hall entertainment, and they also toured the United States. Asmussen worked alongside Benny Goodman and Lionel Hampton as well as Duke Ellington. Ellington invited Asmussen to perform on his 1963 Jazz Violin Session recording with Stephane Grappelli, Ray Nance. Jean-Luc Ponty, Jean-Luc Ponty, and Stuff Smith participated in the 1966 jazz Violin Summit recorded in Switzerland. He was present at the 1967 Monterey Jazz Festival. This festival featured a famous violin summit. He was a guest on the 1969 album “Snakes in a Hole”, which was released by Made in Sweden, a jazz-rock band. At 94, he was still playing the violin. In February 2016, he turned 100. Asmussen’s collection of music, photographs and posters from jazz is kept at the University Library of Southern Denmark. Claus Asmussen is Asmussen’s son and former member of Shu-Bi-Dua. Wikipedia