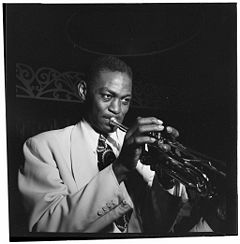 Taft Jordan, a fine trumpeter, was well-known early in his career (when Chick Webb joined him) as a Louis Armstrong soundalike on both trumpet and vocals. His recording of “On the Sunny Side of the Street”, was so similar to Armstrong’s live show, that some listeners believed he was replicating Jordan. Before joining Webb (1933-1942), Taft Jordan had previously recorded and played with the Washboard Rhythm Kings. This continued when Ella Fitzgerald became the band’s frontwoman. Along with Bobby Stark, Jordan was Webb’s principal trumpet soloist during the 1930s. He developed an original sound over time. While he gained much attention while he was with Duke Ellington (1943-1947), Jordan kept a low profile for his final 24 years. Lucille Dixon (1949-1953) and he worked at the Savannah Club, New York. He also toured with Benny Goodman (1958), and had his own band. From allmusic