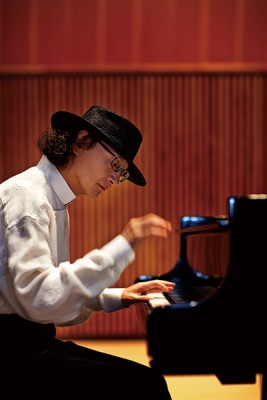 Takashi Kako was conceived in 1947. He studied composition at the Tokyo National University of Fine Arts and Music as an undergraduate and graduate student. In 1971, he was awarded a scholarship by the French government and went to France to study at the Paris Conservatoire with Olivier Messiaen. He made his Paris debut as an improvising piano player in 1973 while still a student. In 1976, he graduated from the Prix de Composition. He was the first Japanese musician to release an album on the German ECM label in 1979. This album, entitled Paradox, was distributed all over the globe. Kako has given concerts of his works in over 200 cities across 26 countries. He returned to Japan in 1980 and developed his own musical style, which incorporated elements from jazz, classical, and contemporary music into his compositional and performing activities. This included works that were commissioned for film, stage, and orchestral performances. Klee, a collection for piano that he based on his impressions from Paul Klee’s paintings, and music to accompany NHK Special documentary Eizo no seiki, are some of his most notable works. He was awarded the Prize for the Best Artistic contribution for his music for Marion Hansel’s film The Quarry. This film won the Grand Prix at the Montreal World Film Festival. Takashi Koizumi directed both films. He won the Music Prize in Mainichi’s 57th Film Competition for his music for Amidado-dayori, in 2002, and “The Professor, his Beloved Equation”, in 2006. Kako’s most recent recoedings are “Anniversary”, which commemorates the 30th anniversary his debut in Pars. Also, a long-awaited solo piano album, “PIANO” (2006), “KUMANO”(2007), “SILENT GARDEN”(2009) and “QUARTET” (2010). from http://www.takashikako.com