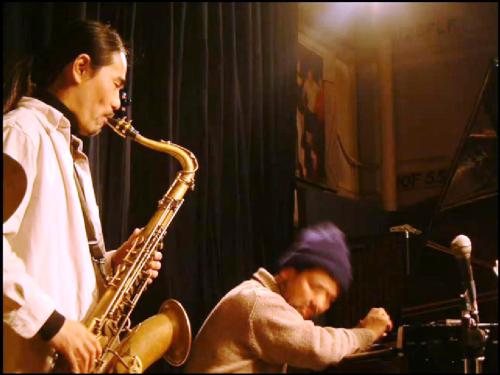 TAKE TAKE is a Japanese jazz duo (Osakan), founded by Takeshi SHIMIZU on piano, keyboards and Tsutomu TAKEI on saxophone. Takeshi began playing keyboards and jazz piano in junior high school. His jazz rock band E.D.F. was formed by Takeshi. He formed his jazz rock band E.D.F. in 1992 with Baker DOI, a “killa”, drummer. He has also played in many projects and units. Tsutomu was a junior high school student who had a tenor-saxophone at the time. He began playing professionally while a student at Kobe University. Takeshi recruited Tsutomu in 1992 to his E.D.F. project. This was a pivotal moment for the two of them. TAKE TAKE’s first album was released by a Japanese independent label, Follow Club Record in August 2011.