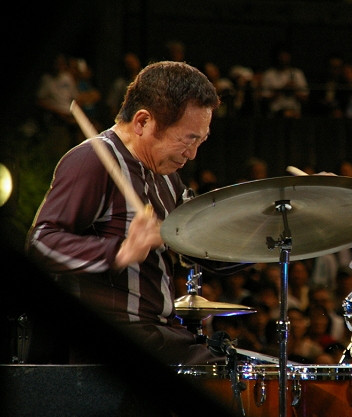 1945 Born in Katsunuma City, Yamanashi prefecture. Graduated from Tokyo National University of Fine Arts and Music’s Percussion Department. He participated in three European tours as a student with the Yamashita Yosuke Trio 1975. 1977 – Formed his own group. He performed in Japan, Germany, Italy and the former Soviet Union. 1984 Enja Records released a live recording of his performance at the East-West Jazz Festival in Nuremberg, Germany. 1989 Returns to performances. 1994 Tours Germany and Italy with the own band. 2002 Recipient of the 27th “Nanri Fumio”, 35th Jazz Disc grand award “Japan Jazz”, 56th Culture and Fine Arts Festival’s Album of the Year award. 2003 He performs in Japan with George Garzone, Abraham Burton and releases the album “Alive Supreme”. 2007 CD “Catch up!” He also released the DVD “Live at Ala” with his regular group. 2010 releases CD “Central Park East” u0026 DVD “MORIYAMA multiplie YAMASHITA.” Since 2001, the “Moriyama Jazz Night”, live performances, have been held every year at the Kani Public Arts Center ala main stage. His performances have been a part of the local cultural activities each year and are based upon new, broad ideas. bio by www.takeomoriyama.net