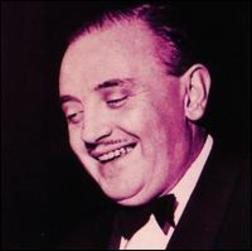 Ted Heath (1902-1969), was the UK’s top bandleader in the 40s, 50s, and early 60s. He was born in Wandsworth (S. London) and began playing trombone when he was 14. He also played with Sid Lipton, Geraldo, Jack Hylton and Ambrose. His career took off after he formed his own orchestra for the BBC in 1944. The biggest success was “Swinging Shepherd Blues”. His orchestra performed regularly at the Hammersmith Palais de Dance in the 1950s, and Heath and his orchestra visited the United States from 1956 onward. Many of the most prominent British jazz musicians were among his employees. His vocalists included Lita Rosa, Denis Lotus, and Dickie Valentine, who would go on to have a successful solo career. Heath’s declining health meant that the orchestra was disbanded. Text contributed by users is available under Creative Commons By–SA License. It may also be available under GNU FDL.