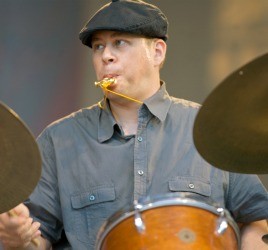 Ted Sirota was a Champaign, IL native who was born May 3, 1969. He grew up in South Suburban Chicago and Flossmoor, IL. Ted started playing drums and percussion at age 10 in 1980. Sirota, at age 10, began playing drums and percussion after seeing Max Roach perform at The Jazz Showcase. To pursue a career as a musician. Ted was a huge fan of both Reggae and Jazz music in high school. He was inspired by musicians such as Max Roach and Philly Joe Jones, Elvin and Sly Dunbar and Style Scott to learn how to play the drums. Sirota graduated from high school and moved to Boston in 1987 to study at Berklee College of Music. Sirota started studying with Alan Dawson, a legendary Jazz drummer and teacher, shortly after arriving in Boston. Dawson’s teachings and guidance had a lasting and profound impact on Sirota’s drumming. Ted’s time at Berklee was crucial in his growth as a musician. Ted also studied with Dawson and Joe Hunt, a Boston drummer legend. Ted was able to develop a musical path through the combination of Hunt’s unique musical vision and his teaching style. It was a very fertile period for Berklee musicians, and Ted learned as much as he could from his teachers and peers. Ted met Jeff Parker, guitarist in 1988. They have a long-lasting musical friendship that continues today. Sirota played regularly with fellow students/friends like Kurt Rosenwinkel and Mark Turner, Seamus Blake and Dwayne Burno. They also played together with Dwayne Blake, Antonio Hart, Roy Hargrove (Danilo Perez), Geoff Keezer. Chris Cheek, Jorge Rossy and Joshua Redman. Sirota started his professional career in this time, playing occasional jazz gigs but mostly performing in local Blues or Reggae bands. Sirota was eventually a founding member in the Last Kwartet, a jazz collective that included Jeff Parker on guitar, Chris Lopes, and Sara P. Smith, on trombone. Sirota graduated Berklee in May 1991. She continued gigging throughout New England until she moved back to Chicago in 1992 with Chris Lopes as her bassist. Sirota and Lopes, who were reunited in Chicago with Parker and Smith, helped to form the Last Kwartet. The band played regularly at local clubs such as the Hot House, Bop Shop, Get Me High Lounge and the Deja Vu and was praised by the local press. The group did not release a recording, and was disbanded in 1994. Sirota started out as a freelance drummer and began to work with Lin Halliday (the late/great tenor-saxophonist), Jodie Christian, Rob Mazurek and Bobby Broom. Also, many local musicians such as Bobby Broom and Fred Hopkins were involved, including Bobby Broom, Fred Hopkins and Dave Spector. Sirota also spent two years touring the U.S.A with Blues legend Eddie Kirkland. Sirota was fortunate to have Kirkland as a friend and mentor. Sirota was a member of the jazz band Sabertooth in late 1994. They performed every Saturday from midnight to 5:00am at Chicago’s legendary Jazz club, The Green Mill. Sirota, now in his 19th year (!) continues to play the drums with Sabertooth every Saturday at Green Mill. Sirota continues to play drums with Sabertooth every Saturday at the Green Mill. He is now in his nineteenth year (!) Sirota is most well-known by Chicagoans because of his involvement with Sabertooth. Sirota began his tenure as a bandleader in 1996, when he founded Ted Sirota’s Rebel Souls. This group continued to feature Jeff Parker on the guitar. Rebel Souls’ debut album, “Rebel Roots”, was released on the British label Naim in 1996 to great critical acclaim. Sirota began to be recognized internationally as a drummer/bandleader among jazz listeners. “Rebel Roots”, which was followed in 1998 by “Propaganda”, and then “Ted Sirota’s Rebel Souls against the Forces of Evil” in 2000. In 2004, the band recorded “Breeding Resistance” on the legendary Chicago label Delmark, and then again in 2008 with Naim for the album “Seize the Time”. In 2004, the band performed at the Chicago Jazz Festival, and again in 2010. Rebel Souls has toured the U.S. as well as Europe. The band includes Parker and other Chicago musicians like Geof Bradfield (Kevin Kizer), Geof Bradfield (Noel Kupersmith), Geof Bradfield II, Greg Ward II, Dave Miller, Clark Sommers, Jake Vinsel, and Noel Kupersmith. Rebel Souls are still playing and are planning their next move. Sirota has been performing with many artists over the years including Ted Nash and Ted Osby, Frank Kimbrough and Ted Nash. Ted Sirota’s Heavyweight dub was formed in January 2013. This was Sirota’s return to his first love, Reggae music. The band, as the name implies, focuses on Dub Reggae and instrumental music. It also features Sirota’s compositional talents. Anthony Abbinanti from The Drastics will be mixing and dubbing in the style of the Jamaican masters. Ted Sirota’s Heavyweight Dub is looking forward to recording, playing, touring and growing their fan base in 2013. Ted has been teaching drums for almost 25 years. Ted continues to teach students of all ages from his studio in Rogers Park, Chicago, where he has been living for 18 years. From www.tedsirota.com