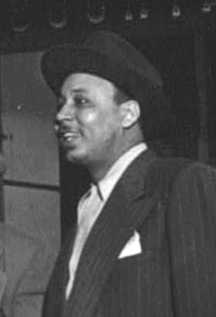 Though he led a successful big band throughout the 1930s, Teddy Hill is best-remembered for managing Minton’s Playhouse in Harlem, a nightclub where experimental jam sessions eventually led to the birth of the lingua franca of jazz: bebop. Prior to that, his musical career began after moving to New York in 1927, where he joined George Howe’s band (which become Luis Russell’s within months), staying until 1931. He started his own band in 1934, attracting such sidemen as Roy Eldridge, Chu Berry, Dicky Wells, Bill Coleman, and Dizzy Gillespie (who recorded his first solos while with Hill). The band played at the Savoy Ballroom regularly and toured England and France in the summer of 1937, but by 1940, Hill had left the band business in order to manage Minton’s. There, such players as Gillespie, Berry, Charlie Christian, Jimmy Blanton, Thelonious Monk, and Kenny Clarke jammed after their regular gigs until past the wee hours, working out advanced harmonic innovations. (Indeed, one of the jams recorded by fan Jerry Newman was given the title “Up on Teddy’s Hill.”) Minton’s importance waned after World War II, though, and when it discontinued its music policy in 1969, Hill became manager of the Baron Lounge. from allmusic