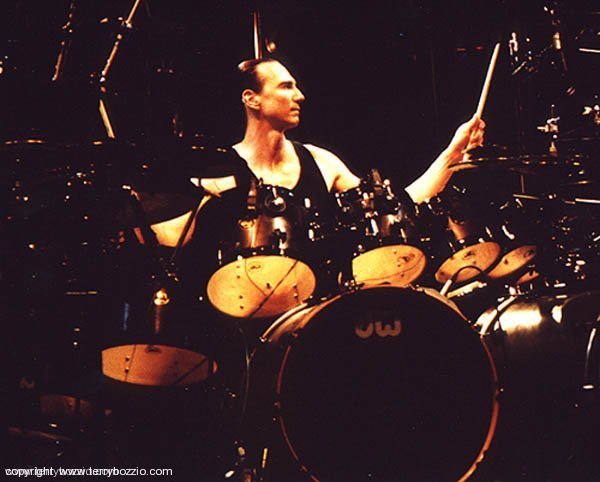 Terry Bozzio started his career as a drummer in Frank Zappa’s backing group during the 1970s. He would go on to be one of the most versatile session musicians in rock and join Dale Bozzio, then his wife, to form Missing Persons, one of the most visually striking outfits of the new wave, together with Dale Bozzio. Born Terry John Bozzio in San Francisco, CA on December 27, 1950, Bozzio started playing drums as a child. He was inspired by The Beatles’ famous appearance on The Ed Sullivan Show. After performing in several local garage bands in the mid- to late 1960s, Bozzio studied music at Sir Francis Drake High School in Marin. He also studied timpani and other forms of percussion. Bozzio was playing in a variety of jazz/fusion groups and had already landed gigs in rock musicals such as Walking in My Time and Godspell by the late ’70s. He also appeared on his first album, Born to Love You, which featured backing trumpeter Luis Gasca. Bozzio got his big break in 1975 when he auditioned and was offered a drumming spot for Frank Zappa. Bozzio’s three-year tenure with Zappa was short. However, the drummer was featured in ten albums and numerous tours. (Bozzio also appeared on the Zappa concert film, Baby Snakes). Bozzio was also the inspiration for many Zappa compositions, including “The Black Page” (with keyboardist Patrick O’Hearn) and “Punky’s Whips”. Bozzio almost landed spots with two potentially intriguing outfits after he left Zappa in 1978. They were a jazz supergroup called Group 87, which included keyboardist Mark Isham and bassist Patrick O’Hearn, and Thin Lizzy. Both ended up not working out for Bozzio, although he would be playing on Group 87’s self-titled debut album a few years later. Bozzio was able to join U.K.’s next project in 1979, and he received the thumbs-up. He also played on two U.K. albums (Danger Money, Night After Night) and their subsequent support tours that year. Next was Missing Persons, a new wave band that Bozzio and his wife Dale formed with Warren Cuccurullo (ex-Frank Zappa guitarist). Their space-age sound and appearance turned heads immediately, and they had two hits singles/videos (“Words”) and “Destination unknown” respectively. However, the band and Bozzio’s marriage ended when Missing Persons only released two albums — 1984’s Rhyme and 1982’s Spring Session A.