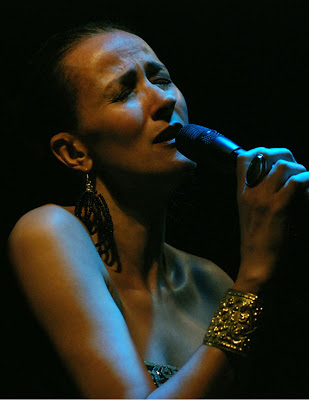 Tessa Souter is a vocal jazz pioneer who has been recording since 2004. . . Full of passion” (Philadelphia Inquirer), and “direct, soulful” (“Village Voice). Sheila Jordan, NEA Jazz Master, places her “at the head of my list of great talents.” Souter’s new Beyond the Blue is her fourth album and second for Motema Music. The London-born Anglo Trinidadian New Yorker has set a new standard. Souter compiled a dozen classic melodies from composers like Beethoven, Schubert, Schubert, or Chopin. Three songs are standard: “The Lamp Is Low” by Ravel, “My Reverie”, “Baubles, Bangles and Beads”, “My Reverie” by Debussy, and “The Lamp Is Low” (Debussy). Other songs are brand new, with lyrics by Souter. The album’s theme is expressed in all of them: the exploration of the shadows and light that are love and intimacy. TetsuoHara of Venus Records was the one who came up with the idea for the project. He also co-produced the date along with Jazz at Lincoln Center’s Todd Barkan. Souter worked with Steve Kuhn, his trio (David Finck on bass and Billy Drummond on drums). The trio was augmented by Joel Frahm, Joe Locke, vibist, and Gary Versace, accordionist. Beyond the Blue was originally released by Venus last year in Japan; Motema Music will now release the CD worldwide. Souter says, “This is a semi-classical album, but it turned out to the be the most spontaneous recording I’ve ever done.” “I was finishing lyrics right up until the last minute and it was the first time anyone, including me, had seen the entire program was when we all met at the studio. It meant that everyone had to be extremely sensitive and creative, listening to and responding to one another in the moment in true jazz spirit. The album’s title track is Chopin’s Prelude In E Minor, which was also the inspiration for Antonio Carlos Jobim’s “Insensatez” in 1963. The album’s second movement, Beethoven’s Seventh Symphony’s Seventh Symphony (which was also featured in The King’s Speech), opens as “Prelude To the Sun.” Will Friedwald, a CD annotator and critic, writes that the source of the melodies “is not important” in the greater sense. “What is important to Souter is narrative and swing. Tessa Souter is a storyteller. After a six-month stint as the Chief Copy Editor at Elle Decoration, and an interim as Features Editor for British Elle magazine, her goal was to become a full-time journalist when she arrived in San Francisco in 1992. She built a freelance writing business over the next two years, working for major newspapers and magazines. In addition, she helped to found the Writer’s Grotto which is now the center of San Francisco’s lively literary scene. Souter moved to New York City in 1997 and was ready to embark on a new career as singer. Mark Murphy was her mentor. Listen Love, her self-produced debut album in 2004, was a huge success. She performed at major jazz venues in Los Angeles and New York as well as in Russia where she regularly performs to packed concert halls. 2008’s Nights of Key Largo (Venus Records), followed by Obsession in 2009. JazzTimes’s Christopher Loudon wrote that “Souter’s crystallized contralto and impeccable phrase are powerful arrows in her bow, but it’s her ability to merge with a song. . . That allows her to score successive bull’s-eyes.” Souter is, of course, also the author Of Anything I Can Do, You Can Do Better (2006) whose subtitle is “How To Unlock Your Creative Dreams And Change Your Life.” Amazon.com