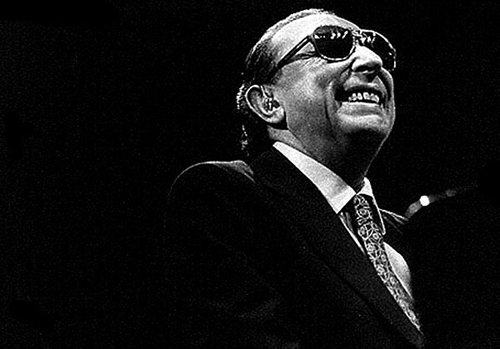 Tete Montoliu, born March 28, 1933 and died August 24, 1997 in Barcelona. His real name was Vicenc Monteloliu i Massana. He was born in Barcelona’s Eixample area and died there. Vicenc Montoliu, a professional musician, was his only child. Angela Massana, an avid jazz fan, encouraged her son to learn piano and, in 1944, hired Petri Palou as his piano teacher. Montoliu took his first lessons in piano with Enric Mas, a private school for blind children he attended between 1939-1944. He studied music at the Conservatori Superior de Musica de Barcelona from 1946 to 1953, where he met his first jam sessions fellows. Don Byas, who arrived in Barcelona 1947, introduced Tete the Bebop style. He met Lionel Hampton, a vibraphonist, in a Barcelona jam session on March 13, 1956. Montoliu recorded Jazz flamenco and toured France and Spain with Hampton. Text contributed by users is available under Creative Commons By–SA License. It may also be available under GNU FDL.