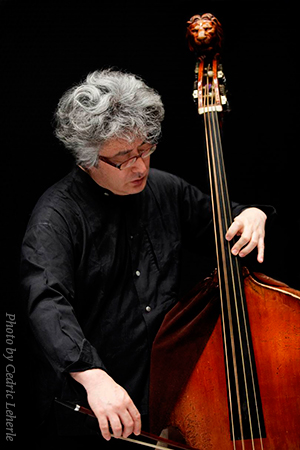 Tetsu Sashitoh (1955-1919) Tetsu is a double bass player, composer and arranger. He was born in Tokyo, Japan, on October 27, 1955. When he was 22, he began playing the bass. He learned the bass by himself, but soon started studying with Nobuyoshi Inouchi (his former high school classmate and teacher) and Keizo Mizoiri (“his former high-school classmate”). Saitoh was still practicing at Gaya, an arts gallery and live music venue in his neighbourhood. Gaya’s owner was impressed by his playing and invited him to perform on the evening’s stage. Saitoh started playing jazz free of charge before an audience twice a month with musicians such as Kazutoki Umezu (alto sax player), Yoriyuki Hayrada (pianist), Shoji Ukaji (baritone sax) and Katsuyuki Itakura (pianist), all of whom were regulars at Gaya. Saitoh also joined Kuchu Sampo (Walk in the Cosmos) in the early 1980s. This was a group that included musicians, dancers, and artists. After Gaya’s closing in 1984, Saitoh joined Masahiko Togashi, a percussionist, and stayed there for six months. He then moved to Masayuki Takaanagi, a guitarist. Saitoh’s first album, Tokio Tango, was recorded in May 1986. Saitoh started two important musical activities in 1986. He began playing tango music and he was the musical director of TAO. Saitoh began tango after Keiki Midorikawa, a cellist, suggested it. He joined a tango orchestra in the same year as Osvaldo Pugliese, who was his bassist and arranger. Saitoh was fascinated by Astor Piazzolla’s music since childhood. In 1989, he formed a group to play Piazzolla music. They recorded Tetsu Plays Piazzolla in February 1990. He has organized various groups to play Piazzolla’s songs since then. Contrabajeando is his current group. It was formed in 1995 and includes two to three double basses, one bandoneon and a piano. Sahara, an original play that was performed in public in October 1986 by TAO, was the first production for which Saitoh supervised the musical arrangement, performance, and musical composition. Since then, he has been the musical director for all TAO’s productions. These include Garcia Lorca’s Black Pudding, which was performed in 1987; the three-part White-Whiskered Lear, which was performed in 1989, Part II and Part III respectively in 1991 and 1993); Media Machine and Hamlet Machine (both based on Heiner Mullar works and performed in 1991); and La Danaide, which was performed in 1996. Saitoh also has developed collaborations with traditional Japanese instrumentalists and with Korean musicians, dancers, and other performers. He founded the String Quartet of Tokio in 1990 with Hideaki Kuribayashi (17-string koto), Michihiro Sasen (tsugaru) and Koichi Hiroki, guitarist. They recorded part of The String Quartet of Tokio that year.