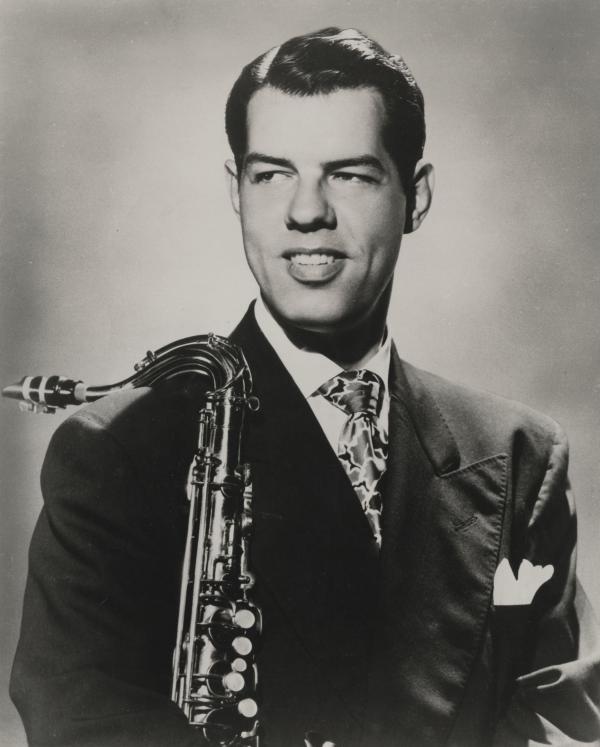 Despite the fact that Beneke lived for more than half a century, the name Tex Beneke is still associated with Glenn Miller. Beneke was the most well-known member of Miller’s pre-1942 orchestra. He featured on songs like “Chattanooga Choo Choo”, “Don’t Sit Under the Apple Tree” and many other popular songs. After Miller’s death in December 1944 and the re-formation and subsequent formation of the Glenn Miller Orchestra, Beneke accepted the invitation to lead the new group. Beneke had more to offer than his vocals on some well-remembered hits. At nine years old, he began playing the saxophone, first on the alto, then the tenor. He also played in various bands throughout Oklahoma and Texas in the late and mid-’30s. He was playing in a Ben Young band and was then taken to Detroit by Sam Donahue. Krupa couldn’t hire Beneke, but he informed a friend in New York about the promising new player. Glenn Miller was a friend who had just formed a band and Beneke was hired. Beneke joined Miller’s orchestra in spring 1938. Beneke earned the nickname “Tex” from Miller. The Miller orchestra was struggling until 1939 when a performance at Glen Island Casino and several radio broadcasts made them a national phenomenon. Beneke was a singer and played with the orchestra. He became a celebrity in his own right. He remained until 1942 when Miller disbanded the band and he became a bandleader for the U.S. Army Air Force. Beneke was drafted to the navy, where he led a troupe of military dancers at an Oklahoma base. Beneke assumed the leadership of the Glenn Miller Orchestra after the war ended. It premiered in January 1946 at the Capitol Theater, New York City. Miller’s widow and estate established the orchestra to imitate the sounds of his Army Air Force band and pre-war Miller band. The 31-piece orchestra also featured 13 string players, making it one of few major bands that included strings. They became a huge success immediately, achieving a remarkable array of hits over five years. One particular gig stood out: in December 1947, a year after collapse of big-band music business, at Hollywood Palladium, Tex Beneke u0026 the Glenn Miller Orchestra performed to a record crowd of 6,750 dancers. Despite the extraordinary popularity of the gig, Beneke was not entirely satisfied with the restrictions the estate placed on the band’s music. They were required to keep to the familiar, reed-centered sound Glenn Miller had almost trademarked. Beneke was a reed player, but he didn’t see any other possibilities. Despite Miller’s protests, Beneke had stated that he had been open to experimentation and had indicated his desire to abandon his familiar reed sound. At the end of 1950 Beneke quit the band and parted ways with Miller’s estate. Later, he formed his own band, which, like other reconstituted big bands lead by ’40s music icons Harry James, was able to thrive in the rock.