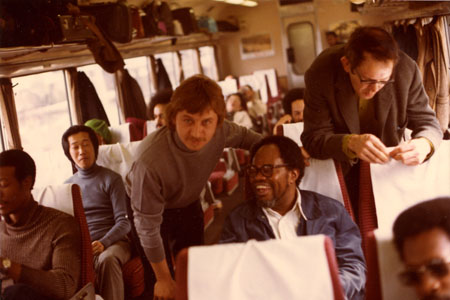 Thad Jones, a harmonically gifted trumpeter/cornetist, formed a large band with Mel Lewis in February 1966 that played Monday nights at Village Vanguard. The orchestra, although it was only a small part of Jones’s life, became well-known and Jones had a place to express himself. One of his songs, “A Child Is Born”, was composed by Jones. Other fine pieces included “Fingers”, “Little Pixie,” “Tiptoe” and many others. The Thad Jones/Mel Lewis Orchestra was originally an all-star band that later became a sideman group. It featured trumpeters Bill Berry and Richard Williams, as well as Snooky Young and Jon Faddis. Jones shocked Lewis in 1978 by moving to Denmark without explanation. He was a writer for a radio orchestra, and he also led his own group called Eclipse. Jones assumed the leadership of Count Basie Orchestra in late 1984 but was forced to retire due to poor health. – Allmusic