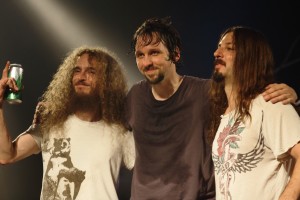 Each member of the band had their own reputations and followers. Guthrie was an internet guitar hero, with YouTube videos that convinced many people. He also had a highly-acclaimed solo instrumental album entitled 2006’s Erotic Cakes. Bryan was a well-known touring veteran with Dethklok and Steve Vai. He also released three solo albums. Marco was a true superstar drummer/clinician. He played with a variety of artists, including Adrian Belew and Eddie Jobson’s UKZ. The guys started swapping mp3’s for the 6-tune set, despite being separated by thousands of miles (Govan was in London, Beller at Nashville, and Minnemann in San Diego). Each member contributed two songs. It was December 2010, and NAMM was just a few weeks away. It was difficult material and there was much to learn. Bryan and Marco, although they had played together before, were not sure what to expect of Guthrie. It wasn’t long before they realized that something was happening when they met for their first rehearsal on January 13, 2011. While running the set, there were more than a few side glances. It was almost unbearable. JT Schmid’s restaurant is the venue for the Anaheim Bass Bash. It is a typical Southern California brewery pub – clean, comfortable, and even generic. It was a strange place to host such an important gig. The band began to jam into Govan’s “Waves” and the crowd was immediately struck by the incredible chemistry. The band was completely in sync by the third song. The band members’ individual virtuosity gave place to near-telepathic interplay. It was obvious to the stunned audience that they were witnessing a real band coming together right in front their eyes. They played as if they had been out on the road for years and still had fun. All of the band members were thrilled afterward. The band members began to talk about doing it again. It was discussed that they would do more gigs and make a record. This album, which included material specifically written for this band, was the result of their conversation. Soon Suhr Guitars became involved in the project. This high-end guitar company has been a long and productive partner of Guthrie. Ed Yoon, who was previously the Suhr marketing and artist relations director and is now the manager for the Aristocrats managed the complex logistics of getting the musicians together in a Chicago studio late April. The jam-packed schedule aside, the men continued to work hard on the writing process, regardless of where they were located. They exchanged mp3’s and charts during a month of song-digging and traveling. The Chicago sessions saw the band only for five days. They managed to track 9 difficult songs, three from each member, and they did so in a matter of 5 days. The music was a mixture of all their influences. They included the great ’70s jazz-rock fusion of Mahavishnu Orchestra and Return To Forever, as well as the progressive rock of King Crimson, UK, and guitar heroes such Joe Satriani and Steve Vai. There were also satirical and complex music from Mike Keneally and Frank Zappa, as well ’90s grunge metal like Rage Against The Machine. This strange mix is filled with memorable melodies and myriad shifts of dynamics. It also features sensitive treatment of musical tones that push the boundaries of what an electric guitar, electric bass, and drums can do in a power trio. The Aristocrats’ debut album will be released worldwide on September 13. The band will be touring the east U.S., Canada, and Chicago to support the album in late September/early October. A full schedule of international dates for 2012 is in the planning stages. The interest has been intense. Guthrie Govan was featured on Guitar Player’s July 2011 cover. Other international covers and feature stories were also published. Beller and Minnemann received repeated inquiries about the record. What happens when you play live music? Fusion is not the only thing that happens. It’s more than shredding. Sometimes it’s not meant to be taken seriously. It’s the sound of a brand new band made up of three men who met at a NAMM concert and realized they had something musically profound in common. They also have a tendency to use R-rated song titles. What do you call such an act? from http://the-aristocrats-band.com