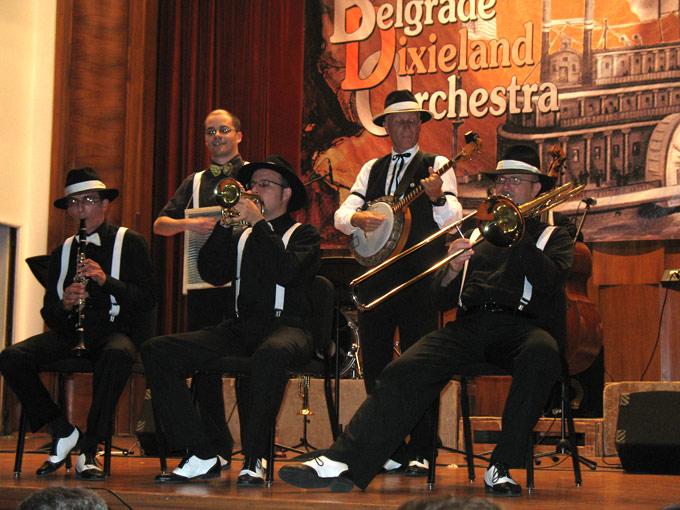 As we entered a new millennium, the Belgrade Dixieland Orchestra (BELGRADE Dixieland Orchestra) was established in 2001. Eight brave individuals stepped up to rescue this beautiful and winning music that was lost in the midst of all the despair. The Belgrade Dixieland Orchestra grew quickly from this small, dark, and glimmering hope to become an important cultural institution in Serbia’s capital. It is now the only representative of this particular musical style in the country. It is the only orchestra of its kind in Serbia and directly responsible for the Dixieland’s triumphant revival, thanks to the foundations laid by jazzmen from across the Balkans for many decades. How did it all start? Dixieland was first performed in the Yugoslavia by local musicians. It arrived there in 1953 and sneaked into listeners’ ears. A half century has passed since that momentous day. Many Dixieland orchestras sprouted around the country under the influence of “Bathing Beauty”, a film that was renowned for its iconic movie. It was an incredible atmosphere of joy, optimism, and a totally new sound that overwhelmed us. Half a century later, Dixieland is still a vital part of our country’s jazz heritage. We are proud to be the Serbian Dixieland Orchestra and are grateful for the historical and artistic value of Dixieland. Its potential impact on new generations of musicians and jazz lovers in Serbia, as well as on those responsible for cultural preservation, will be evident in the second half of the century. from http://www.belgradedixielandorchestra.com