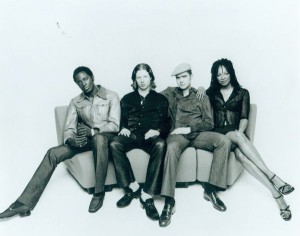 The Brand New Heavies was originally an instrumental acid jazz band called Brother International. After signing their first record deal, the group borrowed from a liner on a James Brown single declaring that the artist was “Minister for New Super Heavy Funk”. They gained a cult following as The Brand New Heavies and were soon signed to Cooltempo, where acid jazz was replacing rare groove in clubs. Jay Ella Ruth, the lead singer of the band, recorded their debut album for Eddie Piller’s Acid Jazz label in 1990. Cooltempo released “Got to Give”, before Brand New Heavies signed with Acid Jazz Records. The band then released Brand New Heavies to high critical acclaim. N’Dea Davenport, who had signed an artist deal with Delicious Vinyl, joined the band. The band was then signed to Chrysalis Records UK as a division. The band released a revised version of their first album, which featured N’Dea Davenport singing lead vocals. “Dream Come True”, “Never Stop” and “Stay This Way” became huge hits across both the Atlantic. The latter was a music video directed and played by Douglas Gayeton, and saw heavy rotation on MTV. The group was inspired by their appearance at a New York City performance with MC Serch (formerly from 3rd Bass), and Q-Tip, (of A Tribe Called Quest), to incorporate elements hip hop music. The group’s next album, Heavy Rhyme Experience Vol. was critically acclaimed. The first album, which featured collaborations with Guru Of Gang Starr, The Pharcyde and others, was critically acclaimed. However, it lacked female vocals. The Brand New Heavies’ Brother Sister (1994), which was released while under Colin Lester’s management and Ian McAndrew’s Wildlife Entertainment, was N’Dea Davenport’s solo album, which she had put on hold in order to join The Heavies. The album was a success, with more singles. However, one of their tracks, a cover Maria Muldaur’s “Midnight At The Oasis”, was only popular in the UK, as it wasn’t included on the US version. The group’s next album, Shelter (1997), saw Siedah Garrett join them. The album contained the minor hit Carole King song “You’ve got a friend”, which was first made famous by James Taylor. This song was not included on the US edition. The album also featured the hit song “Sometimes”. Q-Tip of Tribe rapped the remix of “Sometimes”. The Brand New Heavies released Trunk Funk – The Best of the Brand New Heavies 2000. This was followed by We Won’t Stop (2003), which featured a variety vocalists, and Allaboutthefunk (2004), featuring Nicole Russo, a British singer. The Brand New Heavies were reunited in April 2006 with N’Dea Davidnport and the former label Delicious Vinyl. On June 27, 2006, Starbucks and other traditional music retailers released Get Used to It, a new album. The album was recorded in New York City and London. The lead single, “I Don’t Know Why (I love you)”, was released in May. It was also notable for featuring the “A Tom Moulton Mix”, a trademarked mix that the legendary disco pioneer had been invited to contribute mixes to. Their song “Jump ‘n’ Move” was included on the soundtrack to Happy Feet (2006), a computer animated feature film. It also featured as the in-game soundtrack to NBA Live 2005 2004. They toured in 2006 and 2007. The Brand New Heavies released a CD Live at IndigO2 in 2008 and announced that they would release a new album in 2009. N’Dea Davenport was on vocals. Text contributed by users is available under Creative Commons By–SA License. It may also be available under GNU FDL.