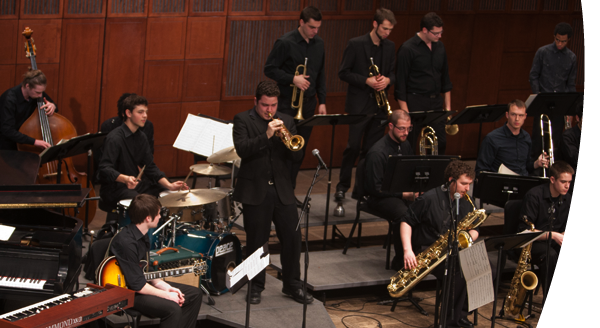 Bringing a college big band from Cincinnati together with a notorious downtown New York composer-arranger-trumpeter to perform expanded and decidedly tweaked renditions of John Barry’s sumptuous soundtrack music for several James Bond movies may seem like an audacious over-reach on the surface. But that was precisely what Scott Belck had in mind when the musical director for the College-Conservatory of Music Jazz Orchestra first contacted Sex Mob’s ringleader, trumpeter-composer-arranger Steven Bernstein about this unlikely collaboration. Bernstein has previously orchestrated large ensembles for Portugal’s Orchestra de Jazz Matosinhos, Arturo O’Farril’s Afro Latin Jazz Orchestra, and Robert Altman’s 1996 film Kansas City. He explained his method for Nobody Does it Better. “I write physically demanding arrangements. I strive to achieve that level of intensity. These guys are young and know extreme music. They can play trombone parts that have really high trumpets and parts that have really low trombones. All these extreme musical parts are so physically demanding that it becomes harder for older people to perform them. “But young guys love that stuff.” This unlikely collaboration between Belck’s college-prominent big band and jazz renegade Bernstein was a success. The results are stunning. Nobody does it better is full of energy and filled with surprise. (From the liner notes by Bill Milkowski