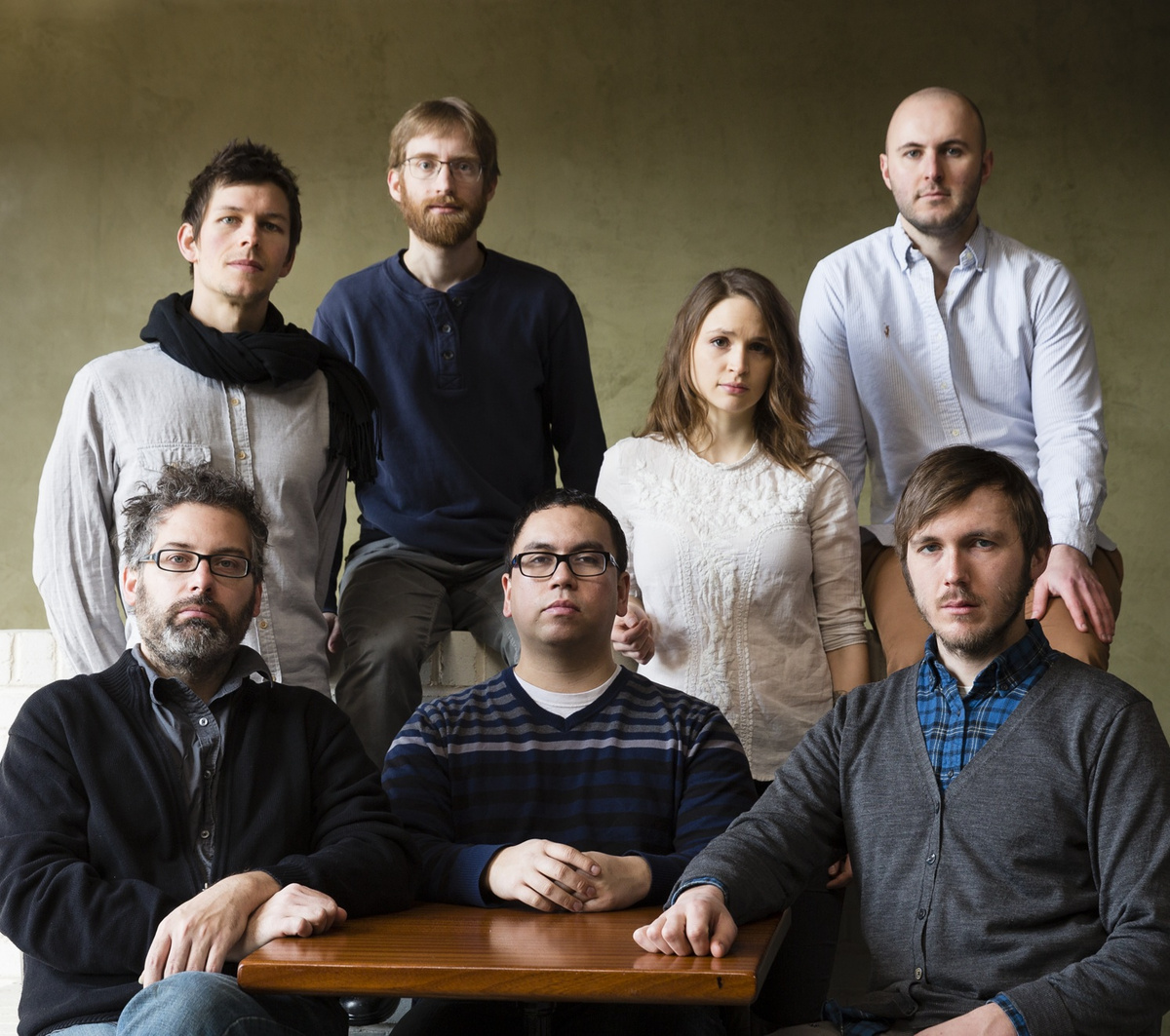 Joseph Branciforte, drummer/producer, and Christopher Botta were long-imagining a fluid synthesis from their diverse musical interests. The details of modern concert music, the improvisational sensibilities and emotional directness that alt-rock offers. Pop’s production value and formal concision, as well as the head-nodding electronica and hip-hop grooves, and the immersive sonics that ambient music offers, are all important. It might be possible to draw from all these influences while also transcending mere collage. These diverse musical experiences could be combined into one personal and unified aesthetic. Could this music be presented as a working ensemble, not just a project in the studio but a group? The CELLAR AND POINT may be able to answer those questions. The “garage-chamber”, septet spent three years crafting their debut album. AMBIT will be released by Cuneiform Records in the fall. Time Out New York described the “garage-chamber” septet’s sound as “ethereal, chamber-prog”, and called their debut record “ethereal, chamber-prog.” AMBIT will be released on Cuneiform Records this fall. It features seven Branciforte/Botta compositions and arrangements by composers Gyorgy Ligiti and Anton Webern. Branciforte u0026 Botta are close friends from Ramsey, NJ. They grew up playing music together, from their middle school days of Rage Against the Machine covers to their high school explorations of jazz improvisation to their formal studies of electronic music and classical composition at Berklee College of Music. Branciforte says, “We absorbed many of the same songs at the same time.” “From Autechre, Morton Feldman, Wu-Tang Clan, to J.S. Bach – it was a lot spent listening, discussing and analyzing.” They eventually returned to New York, where they began composing new music and demos for THE CELLAR AND POINT. To bring their vision to reality, the pair started recruiting a diverse group of young talent from New York City’s jazz and classical music scenes. Joe Bergen, multi-percussionist and founding member of Mantra Percussion, was enlisted to play vibraphone. Botta says, “We knew that we wanted to build our group around a distinct melodic voice – but also something not too indicative or any particular genre.” White Cylinder is a 9.5-minute drum’n’bass inspired tour de force. Bergen uses mechanical precision to navigate syncopated, angular lines. Etude XV is a more ethereal performance. He delicately teases out the voices in an arrangement Ligeti’s piano etude. The group was also joined by the JACK Quartet’s cellist Kevin McFarland and violinist Chistopher Otto. McFarland and Otto can produce a wide range of orchestrational effects, including machine-gun pizzicato runs as well as complex rhythmic counterpoints. They also have extended techniques that were developed over many years of Xenakis or Lachenmann. They improvised multiple layers spectral effects on Ruminant’s basic strings, which were then edited by Branciforte into a dense sonic tapestry. Guitarist Terrence McManus, known for his work with forward-thinking jazz musicians Gerry Hemmingway, Ellery Eskelin, and Tyshawn Sorey, not only had the requisite skills to execute the technically-demanding electric guitar parts, but also brought an improvisational x-factor that helped breathe new life into the meticulously notated music. Tabletop (a), features a McManus solo that is dazzling, while Tabletop(b) sees him adding texture to the group with Frisell-like chordal swells. The studio welcomed THE CELLAR AND POINT in early 2011. This was after more than a year of performance-testing. Botta and Branciforte handled engineering duties. Branciforte also acted as producer. He says, “We knew right from the beginning that we wanted to engineer and produce the record, as well as mix it ourselves.” “There was always something appealing about the DIY recording philosophy of Sufjan Stevens where a homegrown approach seems to amplify the idiosyncratic characteristics of the music.” Botta and Branciforte traveled to Los Angeles in late 2011 to work with Rufus Philpot, a studio bassist. Philpot’s AMBIT playing strikes a delicate balance between providing a solid bottom-end foundation, and taking an active melodic or textural role. Purple Octagon’s fretless bass is a switch Philpot makes, which, together with Branciforte’s propulsive brushwork helps create a driving, infectious groove. The record was made in a series of stops and starts over the course 2012 and 2013. Branciforte quickly became involved in producing and engineering another record, Ben Monder’s Hydra (Sunnyside 2013, 2013), as well recordings for Tim Berne and Mark Dresser. Botta and Branciforte continued to add tracks to their Brooklyn post-production facility. Branciforte laid down piano, Moog bass and glockenspiel while Botta added banjo and guitar loops. The final product was finally ready by the end 2013 Branciforte mixed the record and master it in early 2014. Branciforte added one more piece to the mix. Ambit, the title track that acts as the album’s coda, was actually a result of a technical mistake. Ambit’s original version was approximately 7 minutes long. Although it was the one we spent the most time on, we never felt satisfied with it. A sudden error in the sample rate caused the playback to be slowed down to half its original speed. Chris and I sat down for a while listening and then we both laughed and suggested that maybe we could use this instead. The clocking error was the inspiration for the final album version. Chris and I re-conceived the piece from scratch. Branciforte says, “It seemed strangely representative of the whole project: identifying an ideal, reaching the limit of intentionality and control – then recognizing a new path to proceed through some serendipitous event or element.” “There truly would have been no other way to arrive at this result without going through the entire process.” from http://cuneiformrecords.bandcamp.com