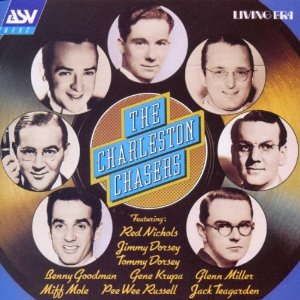 Between 1925 and 1931, the Charleston Chasers was used as a name for a series recording groups that didn’t exist outside of the studios. Leo McConville was paired with trombonist Miff Mole and Arthur Schutt in the 1925 edition. This recording included two numbers. Two years later, The Charleston Chasers had their second session. They were a group that resembled Red Nichols Five Pennies. Nichols played the cornet and trombonist Mole. Jimmy Dorsey was on alto and clarinet (he was later replaced later by Clarinetist PeeWee Russell). Schutt was usually the pianist. Dick McDonough plays banjo or guitar. Joe Tarto is on tuba. Vic Berton was the drummer. The Charleston Chasers, apart from two songs written by Scrappy Lambert in 1928, remained inactive until mid-1929 when Phil Napoleon took over as their leader. The group started out using Mole, Dorsey and Schutt. Later, clarinetist Benny Goodman, trombonist Tommy Dorsey and Eva Taylor, all vocals, joined the group. One of the most well-known sessions under The Charleston Chasers’ name is the last one. It featured four songs recorded by an eleven-piece group, including Charlie Teagarden on trumpet, Jack Teagarden on trombones and Glenn Miller on the drums. Gene Krupa was also part of the group. Paul Small sang pop vocals on two songs, but the renditions of “Basin Street Blues”, and “Beale Street Blues”, (featuring Jack Teagarden’s famous vocals), were undoubtedly the best of the group’s existence. They would have ensured the band’s immortality. Allmusic