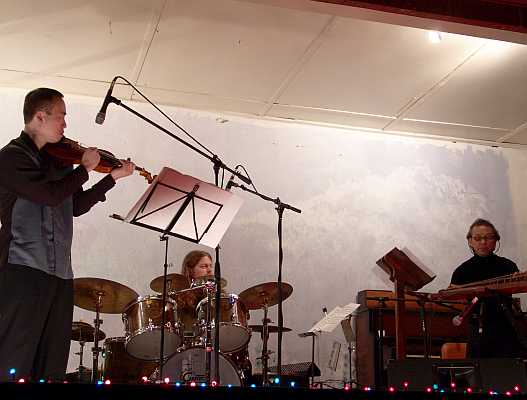 In the past, Asian music and jazz were dominated by “Oriental” flourishes that jazzers used to exoticize their compositions. Over the past decade, an active group made up of Asian-Americans such as Fred Ho, Jon Jang and Glenn Horiuchi has created a flurry of activity exploring the native musics of Asia through jazz arrangement and improvisation. Hwang, a second generation Chinese-American, was born in Waukegan and raised there. The Far East Side Band’s name is a play on the New York location of the group and the distant ancestry that all except one of its members have. The ensemble was formed in 1992 as a three-piece. Hwang plays the violin and Yukio Tsuji, a pan-Asian-born percussionist from Japan, plays alongside Sang-Won Park’s Korean instruments. Park plays the kayagum, a 12-string plucked zither that resembles a koto, and the ajang, which is a 7-string zither with a rosined wood stick to make almost vocal sounds. Park is a rare bird. He is both a master of Korean traditional music, and an open-minded individual who enjoys spontaneous improvisation. Caverns (New World), the group’s first album, established a working system: Hwang’s sectional compositions feature a range of Asian timbres and textures in unison charts, extended solo and ensembleimprovisations. The second record, Urban Archeology(Victo) is by Joe Daley, a tuba player and not the Chicago reedist. It has a richer bottom to offset the bright sonorities from Tsuji’s splashy gongs u0026 cymbals as well as the delicate shakuhachi. Hwang’s electric violin is a whiny sound which I don’t like about the leader’s fiddling. from www.chicagoreader.com