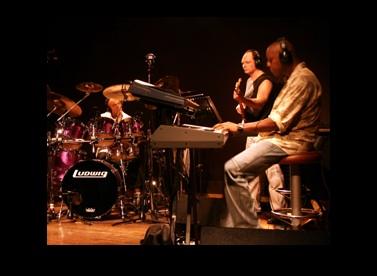 The Fusion Project was founded in 2005. As everyone knows, Mel Gaynor is often on the road with many musicians (Sessions For Tina Turner, Elton John and Gary Moore). We could also carry on …) Mel gives drum clinics all over the globe for Ludwig Drums. He meets Stephane DeriauReine, a session player for many artists, during his 2004 tour of France. After being separated for four months (Mel in studio, Stephane on tour for Boots), they decide that they will play together for the success of Ludwig clinics. They hooked up for the start of a long story. Mel introduces Stephane and Jan-Olof Strandberg to Stephane (at that time, he was the bassist number one in Finland. He is also the highest ranked musician according to the magazines). The pair perform live in Frankfurt at the Frankfurt Musik Messe, April. June, Mel, and Stephane will be performing together at clinics in France. July, Mel and Jan-Olof are joined by Stephane, Jan-Olof, and Jan-Olof to begin recording the foundation of a fusion group that will become The Fusion Project. Stephane decides that he will produce an album with the compositions of some members of The Fusion Project. The new sessions start in October. November: Some guests join the project to record, Jean Lassallette Yves Carbonne -Jean Fontanille Maur… December: The label Great Winds signs and Musea Records decides to release the project. The first album by the Fusion Project, code name, was voted the best Jazz-fusion album 2006. The band now plays in different configurations, including a trio or quartet with different instruments, which gives the band the surprise of newness. The Fusion Project’s top musicians will continue to hypnotize you with their music…from myspace