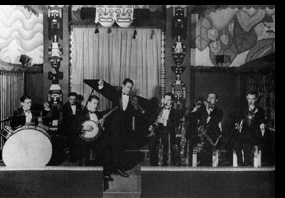 The Virginians were the first small group to emerge from a large band and co-exist interdependently. They included members of Paul Whiteman Orchestra’s early ’20s orchestra. The Georgians were musicians who were part Paul Specht’s big band. The Georgians were based at the Hotel Alamac and performed for dancers in the Alamac’s nightclub, Congo Room, every night after the main ballroom shut down. The septet featured Frank Guarente as a versatile trumpet player, pianist Arthur Schutt played advanced arrangements and was surprisingly skilled in swinging them. There were also two excellent reed players, Russ Morgan and Chauncey Morehouse, who were both top drummers. The Georgians recorded a series of excellent sides that began in December 1922. Guarante formed a New Georgians group and toured Europe in 1924-1927. Six titles were recorded under the trumpeter’s title in 1926. The name of the Georgians was used in the United States for several unrelated studio recording groups, including two titles featuring Red Nichols in 1925. British trumpeter Nat Gonella used Georgians’ name in 1930s due to the success of his “Georgia On My Mind” version. Allmusic