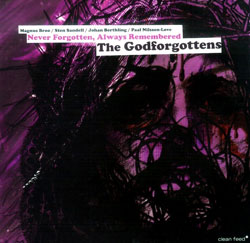 Magnus Broo, the trumpeter, was very much in agreement with the Sten Sandell Trio. This gave continuity to another quartet partnership: that with John Butcher as heard on the album “Strokes”. However, something was not planned: the Hammond B-3 Hammond organ. Sandell found the instrument in a corner of his recording studio, and decided to use it as his main keyboard. One thing is certain: Sandell had never played a Hammond before. The music was changed dramatically. We feel Broo’s influence on all developments. However, the unique characteristics of the organ influenced a different approach than anything previously done by the Sten Sandell Troo. The Godforgottens are the new band that is responsible for “Never Forgotten, Always Remembered”. What a band! It reunites great virtuosos, including Broo and Sandell, drummer Paal Nilssen Love, and bassist Johan Berthling. They don’t choose the easiest route – they want to show their talents for the egotist pleasure. They share a common musical language that combines classical and contemporary music with experimental rock. The axis is hard bop and jazz. It’s quite surprising how much the resultant music sounds! You might think you have heard it all. Here is the CD from creativity land. from http://www.cleanfeed-records.com