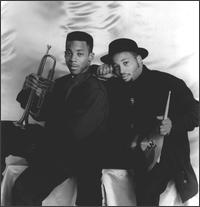 The Harper Brothers, co-led by Winard Harper (drummer) and Philip Harper (trumpeter), were one of the most popular jazz groups of late ’80s. They represented what was right about the “Young Lions” movement. Although the musicianship of this hard-bop unit was exceptional and the players respected their elders well, there was a lack of originality. They were mostly rehashing the past and received too much publicity. The group still produced four great bop albums over its five-year tenure for Verve. Its sidemen, Justin Robinson, Walter Blanding and Javon Jackson, as well as Stephen Scott and Kevin Hays, were all successful in their careers. Since the breakup, both Philip Harper and Winard have been musically more successful. Allmusic