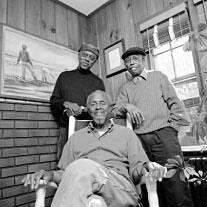 The Heath Brothers were an American jazz band, founded in 1975 by Percy (tenor saxophone), Jimmy (bass), and Albert (“Tootie”) Heath (drums). Stanley Cowell, a Philadelphia-based pianist, was also involved. Later, Tony Purrone (guitar), Jimmy’s son Mtume(percussion) joined the group. Tootie was forced to leave in 1978 and was later replaced by Akira Tana. He returned in 1982. For some of their recordings, they also added sidemen. Only Jimmy and Tootie are still part of the group, with additional sidemen available as required. Brotherly Jazz: Heath Brothers was recorded in 2004 shortly before Percy Heath died. It chronicled the Heath Brothers personal lives and the socio-political issues that many jazz musicians faced in the latter 20th century. They play across genres, including hard bop, big band, and can be considered innovators of smooth jazz and even hip hop from http://en.wikipedia.org/wiki/Heath_Brothers