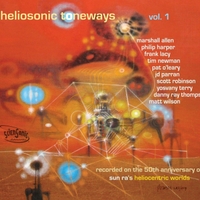 One of the most iconic recordings of far-reaching and adventurous music was recorded in New York City on April 20, 1965. Sun Ra and his Solar Arkestra met in Richard L. Alderson’s RLA Studio to create an incredible and mysterious recording that still amazes listeners today. “The Heliocentric worlds of Sun Ra” was released on Bernard Stollman’s forward-looking ESP label. It sounds like no other record ever made. It was somewhere between avant-garde jazz and outer space chamber music, and introduced 1965 listeners sounds they would not hear in improvised music like the haunting bass marimba and piccolo. Volume Two was released a few months later with the additions of chromatic sets “tuned bongos”, and the mysterious, electronic Clavioline. These two recordings have a distinctive sound palette, and an unusual musical method that blurs the line between compositional and improvisational music. The result is truly unique music, which lives up to the original LP jackets’ warning, “YOU NEVER HEAR SUCH SOUNDS in YOUR LIFE.” ScienSonic Laboratories, 50 years later, has recorded a historic recording in the spirit and “Heliocentric worlds” philosophy. Marshall Allen, a long-standing Arkestra member and original participant, was brought from Philadelphia on April 20, 2015. Richard Alderson, the original engineer who had not worked for Allen since 1965’s Heliocentric sessions, was found and hired to engineer the date. It was made even more special by the discovery of the original bass marimba Sun Ra used on Heliocentric Worlds, which is now in ScienSonic Laboratories’ possession. It was a historic reunion of three people, fifty years later. Allen, Alderson, as well as the original instrument featured on the 1965 LP. Unexpectedly, word of Bernard Stollman’s death reached us at the same time as the session. His ESP label had released the Heliocentric LPs. This session produced Marshall Allen’s first ever recordings on bass marimba and piano, as well as his usual alto sax u0026 EVI. Danny Thompson performed baritone sax, flute. A cast of talented musicians from New York was able to complete the rest of the original instrumentation: Philip Harper, Philip Harper and Yosvany Terry. It was a long day. The second half of the day was dedicated to the smaller instrumentation in “Heliocentric worlds, Volume 2”. The two-octave “tuned bongos” set and the electronic Clavioline were used. This is also part of ScienSonic’s vast instrumentarium. The results of this huge effort are finally available despite many difficulties, including rain and technical problems that had to be overcome. This music is stunning and memorable, and captured with incredible clarity and sonic detail. These sessions are not re-dos. The original music was not duplicated. The goal was to make new music using the original sounds, which is the same instrumentation and distinct sounds. Music that honors the spirit of the original sessions while exploring new, uncharted territory. This is ScienSonic’s most ambitious project yet, and the results speak for themselves. Alderson describes it as “the greatest recording I have ever made” from an audiophile perspective. This music takes you to a place that is utterly new and yet so inviting. Sun Ra once said, “Somewhere there.” This music could only have been created at ScienSonic Laboratories with these musicians and these sounds. This music is unique in any Laboratory production, but it lives up to ScienSonic’s motto “Worlds of Tomorrow through Sound.” You can order Volume 2 of this material from CDBaby in 2018.