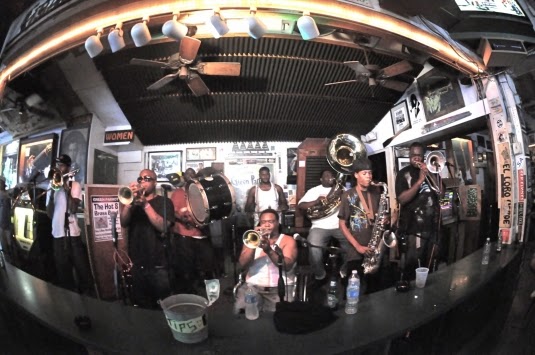 New Orleans’ Hot 8 Brass Band was founded in 1995 by tuba player Bennie Pete, Jerome “Bay Bay” Jones (trombone) and Harry “Swamp Thang” Cook (bass drum) to play brass band music professionally. Although many of the current members began playing together in high school, over time the line-up has inevitably shifted and changed, and continues to do so. But any incarnation of Hot 8 Brass Band will boast eight or nine players of the highest rate, bringing the passion and noise through a bevy of trombones, saxophones, trumpets, snare and bass drums, all buoyed up by the immense tuba basslines of band leader Bennie Pete. These musicians over the years have been inspired by artists such as Tuba Fats, Leroy Jones, Louis Armstrong, JJ Johnson, Stevie Wonder and Jackie McLean, and have variously recorded and performed with some of those mentioned and more. They also continue to cite each other as influences. Whilst in the UK, Hot 8 Brass Band attracted a phenomenal buzz, appearing on The Culture Show on BBC 2, recording a Maida Vale session for Gilles Peterson’s show on BBC Radio 1, and laying down a couple of tracks with Basement Jaxx. Their music has also featured on a Volkswagen advert. The phenomenal success of the tour prompted a call from the Big Chill festival, where they played a crowd-pleasing set in August 2008 and were picked as a festival highlight by the Observer newspaper, along with a series of other UK dates. Hot 8 Brass Band have always believed in contributing to their culture by playing in traditional Second Line parades, expressions of freedom and community through music and interaction. They have earned a great reputation on the streets, with seemingly boundless work ethic and energy: Hot 8 have been known to pack in nine shows in a single day. Having survived one of the worst natural and political disasters the USA has ever known – Hurricane Katrina – Hot 8 have thrown themselves into the subsequent relief and awareness projects to aid their community’s redevelopment and recovery. They have been a key band in “SAVE OUR BRASS!” a local grass roots project that has brought music to evacuee shelters, temporary trailer parks and reached out to New Orleanians. Over the years Hot 8 Brass Band have faced more than their fair share of adversity. Four band members have died (three of them lost to violent acts on the streets of New Orleans) and the band are now active figures in the group “Silence is Violence,” an anti-violence campaign that was founded following the murder in December 2006 of Hot 8 member Dinerral Shavers. “Finding Our Folk” is another organisation which is a prime concern. It seeks to assist New Orleanians displaced after Hurricane Katrina. The band members’ focus now lies with keeping the problems of the city on everyone’s minds as they travel around the country and the world. from http://www.hot8brassband.com