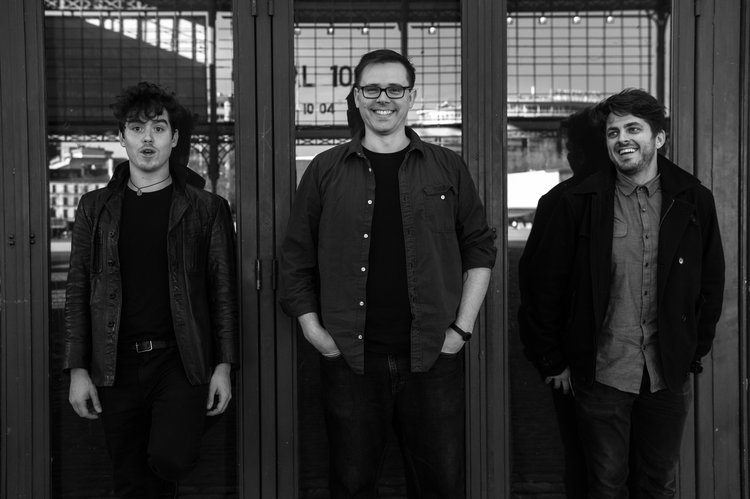 TKE is comprised of drummer Caleb Dolister and bassist GaelPetrina, as well as Warren Walker, saxophonist. The trio have been working together for 10 years to improve their production and instrumental composition skills. Their music is multi-textural and adventurous, rhythmic, and dark. It can also be filled with risk and cohesion, while still navigating unusual time structures. Walker and Petrina’s love for electronica inspired their use of effect pedals to create rich textures. Dolister’s open admiration for heavier bands such as Meshuggah and crossover projects like Jaga Jazzist often inspires a rigor in his drumming, paired with polyrhythmic complexity. Although it can be difficult to identify with one genre, there are clearly undertones of Pop and Rock as well as many flavors of Electronica. The primary focus of any genre is composition. Often, most pieces are composed from the very first note. A project that is rooted in jazz will never seem unintentional, lost or dissonant, nor arrhythmic. Most pieces will be more at home with Pop than the avant-garde. The band members have a strong jazz-studies and improvisation background, so there are plenty of opportunities for songs to be soloed or played in a group setting. They sound more like a band that has mastered their musical vision than one that is just trying to. In Paris, 2007 saw the formation of The Kandinsky effect. It was originally a jazz band with Gautier Garrigue, their Parisian drummer. Although they had some electronic influences at the beginning, their early compositions used a more acoustic sound and occasional effect pedals. They also played upright bass and Aphex Twin covers. Or funky grooves in 15/8. When we all started to compose in our own way, it was a joy to come together. The majority of our songs began with one of us sharing an idea or a sketch to the two others. We would then work together to complete the idea and arrange it. Although you could clearly hear all of our influences in the final piece, it felt like a fourth musical vision was emerging because of our collaborative approach. Walker explains that this is how we got started, and it’s still how we write our songs.” Their self-titled debut album was released by SNP Records in 2010. All About Jazz praised the album as “organic” u0026 “forward-thinking”, and it gained enough attention that the band was able to tour the U.S. and expand their European explorations. Caleb Dolister was invited by All About Jazz to take part in a few U.S. tour. Warren and Dolister had been friends in college at the University of Nevada, Reno. This provided them with an opportunity to work together on a project. Caleb Dolister was officially appointed full-time percussionist after several tours in 2009, 2010 and 2010. While Dolister was on tour, the guys were already arranging music for their next album and Dolister’s contributions were evident in the music. They traveled with Dolister to Iceland in September 2011 to perform at Reykjavik Jazz Festival. The guys were given the opportunity to record at Studio Syria Hafnarfjordur (AKA Kidda i Hjalmum) Later, the tracks were mixed at Birdfood Studios with engineer Sam Minaie and Melody Gardot. They were then masterbuffed by Nate Wood (Kneebody). Synesthesia was released on January 2013, by Cuneiform Records. It received many high-praising reviews from the international jazz community. TKE continued to tour the U.S., Europe and Canada in 2013, and started planning for a follow-up album for Cuneiform records in 2014. The band’s roots were acoustic, and Synesthesia was a significant departure with its heavy percussion and electric basses. It was a crucial step in establishing a new identity. It was still a collection of songs that had been written over many years, and it felt like a lackluster composition. One of the goals when the band started writing the next record was to create a consistent sound throughout. To achieve this goal, each person would create an idea and then another would try to come up with a complimenting one. The band had many thematic songs and was ready to go. They then headed to Le Studio des Egreffins in Videlles, France, to record Somnambulist. The session was short and stressful, with Nicolas Charlier as recording engineer. Nate Wood masterminded the album, while Sam Minaie later mixed it. It was released by Cuneiform Records in January 2015. It was released by Cuneiform Records in January 2015. The band went to Chamonix, France in April 2016 to begin work on a new album. Nicolas Charlier was again a recording engineer. The band lived in the studio for a week, often working late into the night or in the mornings to perfect the design of each song. Sam Minaie mixed it and mastering it was done in early 2017. “We have definitely improved–reach a new level. Pax 6 is much more than just a collection of new Kandinsky effect songs. It also showcases the place that playing live, in a studio, and writing together for ten year has taken us as a trio. Petrina says, “I think that speaks for everyone who listens.” from https://ropeadope.com