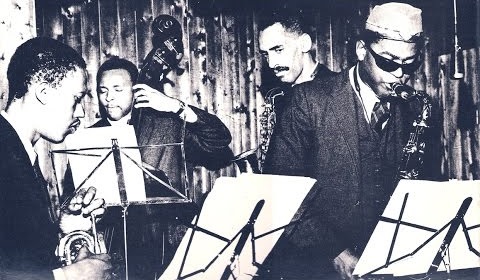 Although the New York Contemporary Five is largely forgotten today, it was an important group that existed for a year and was a pioneering avant garde combo. The Ornette had just lost Don Cherry, the Trumpeter. However, the New York Contemporary Five recorded five albums that would shape jazz. After the fact, they were a formidable group – Don Cherry, Archie Shepp and John Tchicai, all relatively newcomers at that time, made them a great band. Cherry was just starting to explore world music after he had left Ornette Coleman. Shepp, fresh from a stint with Cecil Taylor, had just discovered his voice as a performer and composer. Tchicai was almost unknown. The scorching music of their band – aided greatly by Don Moore’s and J. C. Moses’ hard-hitting rhythm section – is a captivating mix of soloing, post-bop structures and memorable heads. Tchicai and Shepp offered two options for sax players. Shepp valued texture, density and fragmentation. Perhaps a pointillist version of Coleman Hawkins or Ben Webster. Tchicai was a master at melodic invention. He crafted bright and hard phrases that seemed unpredictably out of tune. These tunes are remarkable for their internal tension. They are wound tighter than a magnet coil, but without sacrificing spontaneity. This jazz is full of unpredictable and wild drama, although there’s not much that’s free. “Consequences”, the record’s abrasive track, is built on fiery performances that culminate with a Don Cherry solo. It sounds like a fifty-foot skid mark. Their rendition of Bill Dixon’s “Trio”, however, is more contemplative. It features a slow groove, interwoven textures, and a series a wonderfully sustained solos that showcase the stylistic strengths each player. Although not many jazz fans might have bought their records, it’s clear that other musicians were paying close attention to the New York Contemporary Five. (Here’s a fascinating and informative look at John Tchicai’s next steps. Bill Shoemaker has just published Point of Departure on the New York Art Quartet. from http://destination-out.com