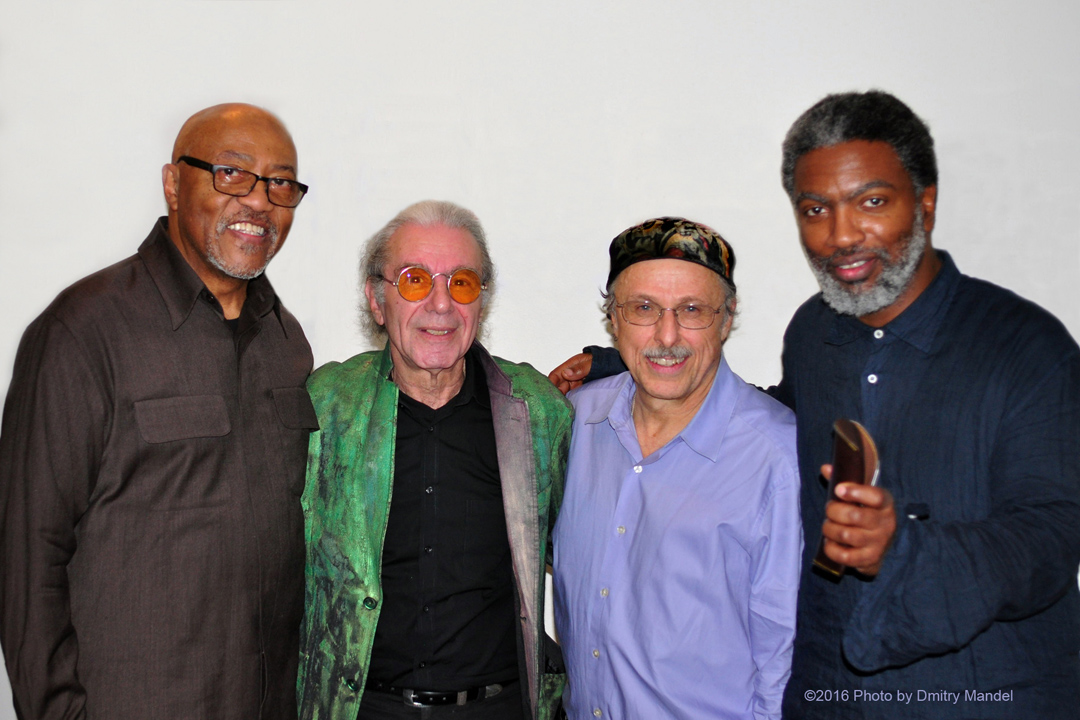 OGJB is a quartet of four top musicians who have joined forces to create a new musical experience. Oliver Lake, composer and saxophonist, has an uncompromising artistic vision. He has been involved in all aspects of art creation since 1968 when he founded The Black Artist Group. Oliver is a long-standing and respected saxophonist on the progressive jazz scene. He has enjoyed a rich and successful career. Oliver continues to collaborate with many brilliant and creative people, including his Organ Quartet and Big Band, the World Saxophone Quartet and Tarbaby, as well as notable collaborators like Flux String Quartet (Myra Melford), Roscoe Mitchell, Vijay Iyer and Meshell Ndegeocello, among others. Oliver has been involved in City Of Asylum Jazz Poetry concerts for over ten years. Lake was a recipient of the Guggenheim Fellowship. He has also received commissions from Library of Congress and was awarded the Mellon Jazz Living Legacy Award by the Kennedy Center in 2006. Oliver was the recipient of the Doris Duke Artist Award in 2014. The next years are sure to be filled with exciting artistic endeavors. Barry Altschul, a drummer and composer was born in the Bronx on 6 January 1943. He quickly became a fixture in the hard bop scene in the 1960s and 50s. It was his gig with Paul Bley’s trio, a pianist, that landed him in the New York’s emerging free jazz scene. These recordings led to world tours and recordings featuring such luminaries as Steve Swallow and Gary Peacock, Roswell Rudd and the Jazz Composers Guild Orchestra, Roswell Rudd and many more. He played with Chick Corea and Dave Holland in the Cooperative Band Circle at the end of 1960s. He also performed with the Sam Rivers Trio featuring Dave Holland and the Anthony Braxton quartet which included Holland, Georges Lewis and Kenny Wheeler. He was also familiar with the tradition and was able to work with Sonny Criss (Hampton Hawes), Lee Konitz, Art Pepper(Art Pepper), Kenny Drew, Tony Scott (Tony Scott), Johnny Griffin, Babs Gonzalo, and many other musicians. He also led his own free jazz groups with luminaries like Anthony Davis, Muhal, Richard Abrams and Santi Di Briano. He was the first foreign artistic chief of the French regional big band of Nancy after a decade-long stay in Paris. His arrangements were written by Colderage Taylor Perkinson, and he also conducted the orchestra. He also traveled to Africa, the Middle East, and Eastern Europe during that period as a cultural ambassador of the USIS. In 1993, he returned to the USA and worked as a professor at Sarah Lawrence College. He also freelanced in New York City, and played with a Dave Douglas team, where he rekindled his relationship with Roswell Rudd. He is now part of the F.A.B., in addition to performing with Roswell Rudd’s Trombone Tribe. He is also part of the F.A.B., which includes the Trio (Joe Fonda and Barry Altschul), and many other projects. Barry has been a part of over 160 recordings, 10 under his leadership. He studied with Charli Perrysip and Sam Ulano. When asked about his music, he cites the late great drummer Beaver Harris who said “from Rag Time until no time”. He has performed all over the globe, appearing at major concerts, festivals and nightclubs as well as on radio and television. Graham Haynes is the son of Roy Haynes, a jazz musician who grew up with jazz musicians all his life. Although his primary instrument is the cornet he is not a jazz musician these days. He uses technology to create subtle, imaginative sonic environments. His horn is a standout in electronic processing. It provides a level of expression that elevates synthetic sounds and humanizes them. Haynes mixes compelling, hypnotic lines of horn, experimental post-techno rhythms with world music grooves, ambient textures, and other sounds to produce commendable results. Joe Fonda is a composer and bassist, as well as a recording artist, producer, educator, and interdisciplinary performer. Fonda is an accomplished international Jazz musician who has performed with his own bands throughout the United States, Canada, Europe, and Asia. Fonda has performed and collaborated with many artists, including Archie Shepp and Ken McIntyre and Lou Donaldson. Fonda was the bassist for the Anthony Braxton sextet (octet), tentet from 1984 to 1999. Fonda was also on the Board of directors from 1994 to 1999 and President of the Tri-Centric Foundation from 1997 to 1999. Fonda has performed with the 38-piece Tri-Centric Orchestra under the direction Anthony Braxton. He was also the bassist for the first performance of Anthony Braxton’s opera Shalla Fears for the Poor at the John Jay Theater in New York. This was October 1996. Fonda was a recipient of many grants and commissions from Meet the Composer New York as well as the New England Foundation on the Arts. Fonda has made twelve recordings under his own label. (Reviews of recordings and recordings available). Fonda was also a member The Creative Musicians Improvisors Forum, which was directed by Leo Smith. Fonda was also the bassist for the American Tap Dance Orchestra, New York City, which was directed by Brenda Bufalino, a world-renowned tap dancer. http://roulette.org