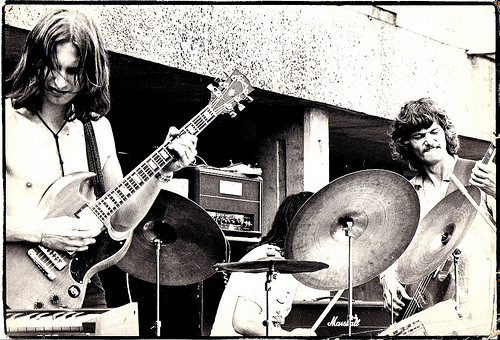 From 1976 to 1978, The Polite Force was a British rock band that played progressive rock in the Canterbury scene. The 1971 Egg album with the same name is the inspiration for the name. After two years of recording sessions, Mark Hewins (guitar), Max Metto(sax), Graham Flight and Vince Clarke (drums), the band was formed. It was recorded for an album by Dave Sinclair (Caravan keyboardist), which was not released until 1993. The album was titled Moon Over Man. Sinclair was a Polite Force member for about one year. Polite Force featured guest musicians like Richard Sinclair, Tony Coe, Geoff Richardson and Richard Coughlan. Some demos were never released until 1997, when Voiceprint published some on the album Polite Force – Canterbury Knights. From discogs