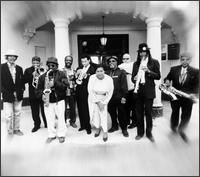 The Skatalites are more than just a band. They were an institution. A group of top-notch musicians, the Skatalites, were not only the sound of Jamaica in the 1950s and 1960s, but they also influenced the music of the rest of the world. The original Skatalites group was only around for 18 months. However, its members brought their unique styles to hundreds and hundreds of island releases. Officially, the Skatalites were Jerome “Jah Jerry” Hinds as guitarist, Lloyd Brevett as bassist, Donat Roy “Jackie”, Mittoo as drummer, Johnnie “Dizzie”, Moore and Tommy McCook, tenor saxophonists Lester Sterling, Roland Alphonso (both Cuban) and Don Drummond, trombonist. All three were graduates of the Alpha Cottage School for Boys in Kingston. It was an institution for troubled boys that is run by the Catholic diocesan. The school was known for its music program which over the years transformed hundreds of troubled boys into musicians of note. They all ended up on the hotel circuit and churned out R.