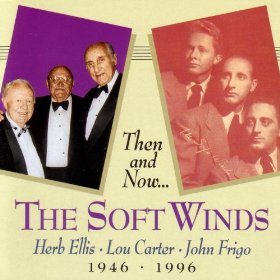 The Jimmy Dorsey Orchestra had Herb Ellis as a guitarist, Lou Carter as a pianist, and John Frigo was the bassist. In 1946 they formed a trio to go out on their own, the Soft Winds. The Soft Winds were a resemblance to the Page Cavanaugh and Nat King Cole trios but they weren’t identical. They remained together until 1950. The band is best known for their compositions of “Detour Ahead” (and “I Told Ya I Love Ya”, now get out). After a few years, the group broke up. Unfortunately, the 16 songs they recorded for Majestic in 1947 and 1949 were never reissued. However, Carter persuaded Hank O’Neil in 1995 to release 13 vintage acetate recordings of Carter. O’Neil’s Chiaroscuro record of the Soft Winds’ reunion featured Carter (who had a long and successful career), Frigo, Ellis, and Keter Betts in top form. Allmusic