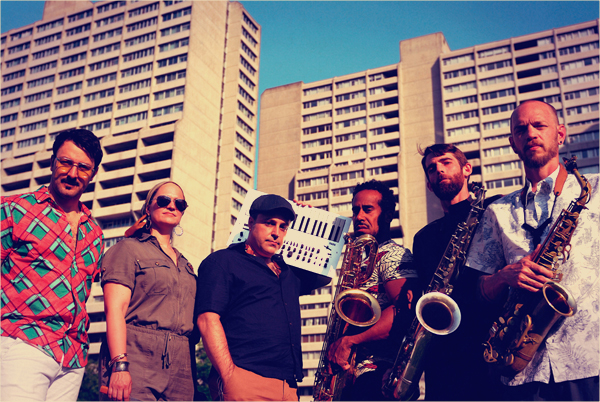 The Souljazz Orchestra was first introduced to the scene in 2000. Since then, they have never stopped pushing the boundaries of their signature sound. A blaring mix of jazz, soul and tropical styles is unleashed with dusty keyboards and a slew of earthquaking drums. Chaos Theories, the new studio album by The Souljazz Orchestra, is out now. The Canadian collective is well-known for its strong social and political messages. These nine tracks are a direct attack on the hypocrisy and abuses of power by police and the daily struggle of the working class. The band is constantly evolving its sound, using a wide range of styles, including its Latin, Afro, and Caribbean sounds, as well as some of the cross-pollinated UK sounds from the early ’80s (the era of The Clash and The Police), 2-Tone, and frontline reggae. Pierre Chretien says that the band was “basically playing around with the idea to create our own flavor of Afro-punk”. He adds, “something with fierce, in-your face energy of punk rock and free jazz, but still supported by the soulful, hypnotic rhythms of tropical music.” The album moves the listener away from sonic bombasts to reflective and thought-provoking moments. “Police The Police” opens the album, showing the problems of North American police violence from a personal perspective. “House Of Cards” then takes a dig at the US government on a disco groove. “Boat Rockers” challenges us all to see beyond the accepted norms. “General Strike,” which documents the frustrations of working class people as the economic gap grows wider, “Slumlord” shines the spotlight upon dodgy landlords. “Well Runs Dry”, a brilliant close, laments and its chaotic pace and mundane obsessions. The Souljazz Orchestra is now in its 17th anniversary. Three-time Juno nominees, the Souljazz Orchestra, has been able to take their show to more than two dozen countries in North America, Europe, and Africa. They have shared the stage with some of the world’s biggest names, while not slowing down. Years of tireless touring have made the Souljazz Orchestra’s live concerts legendary. They often end in exhilarating, sweat-soaked, cathartic events that mix pulsating arrangements and eruptive improvisations. from www.souljazzorchestra.com