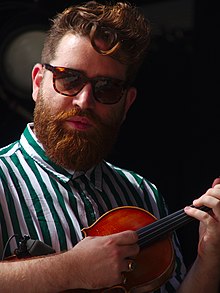 Theo Ceccaldi, a violin player, is one of the most significant revelations of the French new scene. He was also named “musician 2017” by Jazz Magazine. In September 2017, he received the Jazz Victory Awards “revelation 2017”. He’s been a fixture on the french creative jazz scene for the past couple of years. His collaboration with “Orchestre National de Jazz”, as well as his many international collaborations (among others: Joelle Leandre and Louis Sclavis), Eve Risser, Daniel Erdmann, Dejanterzic, Christian Lillinger With FREAKS as his band leader, Theo Ceccaldi has surrounded his self with virtuoso improvisers to create his own universe that combines sonic deflagrations of sophisticated and nuanced. From www.orotone.fr