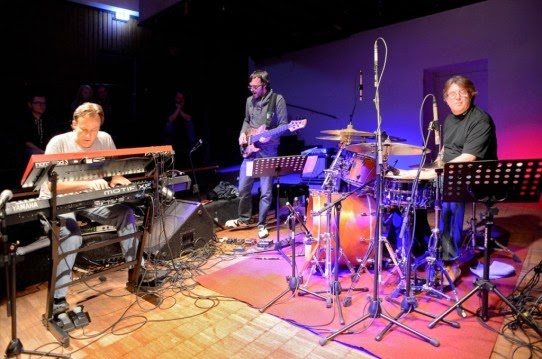 Third Rail, a jazz-funk supergroup with impeccable credentials, has incredible bloodlines. The lineup is a who’s who of the downtown New York art scene: guitarist James Blood Ulmer of the Music Revelation Ensemble, Ornette Coleman’s group, and numerous solo albums; drummer Joseph “Ziggy” Modeliste, formerly of the mighty Meters, New Orleans’ definitive band; vocalist, keyboardist, and composer Amina Claudine Myers of the avant-jazz collective Association for the Advancement of Creative Musicians; the extraordinary keyboardist Bernie Worrell, of Talking Heads and Parliament/Funkadelic legend; and, of course, Bill Laswell, the bassist/producer who is required by law to appear on every third album recorded in New York City since 1981. As an avant-jazz version to the Cream-style power trio, Ulmer founded Third Rail in 1993 with Modeliste and Laswell. Soon after, Worrell and Myers joined the group and they became regulars at Knitting Factory and other New York clubs. For a few years, the group toured with the P-Funk Revue. In 1995, Third Rail released South Delta Space Age as its first album. The 1997 sequel, featuring Jerome “Bigfoot”, Brailey as the drummer, was initially announced as As It Is by Third Rail. However, the album was finally released under the name James Blood Ulmer’s Blue Blood with the same compositions and personnel. from http://www.allmusic.com