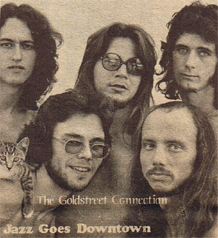 The Minnesota-based Jazz-Fusion-Rock “This Oneness”, musicians were Gregg Inhofer and Dale Strength. (In the 1960s and 70s, pepper fog was an aerial spray that was dispersed from helicopters. It would make your eyes water and is why I believe that the name of the band Pepper Fog was chosen.)) Robyn Lee and Doug Nelson can be found at his YouTube channel as well as Bernie Pershey’s website. Bernie was also part of one of the many iterations White Lightning in the Minneapolis region. John Ebert was Sound Engineer for his owner-operator triamped “Phase Linear 400”, “Wall of Sound”. John was with the band for their first show in Fort Dodge, Iowa National Guard Armory. Oneness covered Mahavishnu Orchestra Birds of Fire, Chick Corea’s “Return To Forever”, Hymn of Seventh Galaxy album and was also the opening act for Chick once on the east coast. The Oneness group supported Olivia-Newton-John’s road trips in America between May 1974 and 1975. They also appeared on the NBC Mar. 7th 1975 “Midnite Special” broadcast. Olivia made her first American stage appearances on the May 1974 midwestern college tour, which was managed by Variety Theater International. The enthusiastic turnout of the audience convinced everyone to continue her musical journey in America. One show was given to a record crowd at the 1975 Minnesota State Fair Grandstand racetrack track stage. Harrah’s South Shore Room, Lake Tahoe, Nov. 6, 1975 was where the group performed. William B. Harrah took the group on a day-trip to the lake in his Chris Craft 33-foot boat equipped with two 12-cylinder aircraft engines that could reach speeds of 55 mph. This Oneness wanted to return to their original focus of writing and producing “Surprize” and promoting the group. There is enough studio work left over from that era to make two “albums”, which were taped and may be digitalized, mastered and published one day. Doug Nelson, the man in the group photo wearing the round glasses, died in an unexpected accident in 2000 in McGregor, Minnesota. He is greatly missed by all those who knew him. Dale, Gregg, and Robyn are in the Twin Cities area performing, Bernie is kicking the kit in various places around the U.S.A. from http://minnewiki.publicradio.org