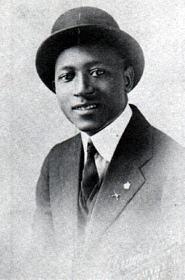 Thomas Morris, a cornetist from New York, is a shadowy but prolific figure in the early days of New York Jazz. In the mid-1920s, he led a band called Thomas Morris and Seven Hot Babies of Harlem and was featured on approximately 150 recordings. He recorded with Sidney Bechet and Charlie Johnson’s Paradise Orchestra, Fats Waller and Clarence Williams, as well as accompanying Blues artists like Margaret Johnson and Sara Martin. In 1929, he appeared briefly in “St. Louis Blues”, a Bessie Smith film. In the 1930s, he quit the music industry and became a Red Cap at Grand Central Station in New York. He then joined Father Divine’s Universal Peace Mission Movement. This was a predominately African American fundamentalist Christian group that believed in equality for all people. The leader, Father Divine, was also the second coming of Christ. Morris became Brother Pierre and followed Divine. The Universal Peace Mission Movement required that Morris live a life without alcohol, smoking, drinking, obscenity or profanity. He also had to stop receiving gifts, tips, or other forms of gratuity. Marlowe Morris, a Jazz pianist, was born to Thomas Morris. from http://www.redhotjazz.com