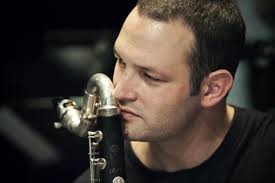 Thomas Savy, who had studied classical clarinet at Paris’ Conservatoire National de Region and received a Premier Prix in 1993 was admitted to the Jazz and Improvised Music section at Paris’ Conservatoire National Superieur de Musique. He joined the department in 1994. Francois Jeanneau and Herve Sellin taught him, as well as Jean-Francois Jean-Clark, Francois Theberge and Jean-Francois Jennifer-Clark. He was awarded a Premier Prix for Improvisation in 1997. He continued to play in clubs and joined small groups, before becoming a regular member of big-bands in Paris. In collaboration with Arnaud Redbotini (composition and programming), and Vincent Artaud, (composition and orchestration, electric bass and acoustic basses, keyboards), he contributed to several projects in Contemporary Music (INA-GRM and Radio-France) A multi-instrumentalist (saxophones, clarinets, and sometimes electric bass), Savy generally plays tenor sax when performing with big formations, but his personality shows best when he plays bass clarinet. As a child, he was surrounded by big-band music and the tradition of the saxophone. His activities as a leader, composer and musician are completely and solely dedicated to this instrument. Thomas Savy is deeply committed to Jazz history and its practice in traditional forms. He also feels comfortable as a musician within modern contexts because of his “double culture”, which he uses as both an improviser as well as as a musician who is familiar with Contemporary Music. Thomas Savy has performed on stage and in studio with Christophe Dal Sasso’s Nonet, Raphael Imbert’s Nine Spirit and Pierrick Pedron’s sextet. He also played in Francois Laudet’s big-band, Francois Theberge’s Slow Band, Francois Laudet’s Institute of Advanced Harmony, Steve Potts’ Institute of Advanced Harmony and David El Malek’s “Music from Source” project. Amy Gamlen’s octetetetetetetetetetetetetetetettetetetetetetetetetetetetetet. He recorded with Patrick Artero and Rick Margitza and Julien Loureau. He is a true expert on his instrument and combines the discipline of a Classical Music soloist and his ability to improvise in Jazz and Contemporary Music. Thomas Savy’s debut album Archipel was praised by French critics (CHOC Jazzman and Disque d’emoi Jazz Magazines, fff Teleramas, Le Monde) as well as listeners. After a series of Paris concerts, David Sanborn invited Thomas Savy to join his band with the legendary Tower of Power brass section to perform on the Montreux Jazz Festival’s main stage in July 2008. Savy returned to the studio in June 2009 with his bass clarinet, his compositions, and BILL STEWART (drums), and SCOTT COLEY (acoustic basse), at Systems Two Studios in NYC. Thomas Savy was a bit intimidated by the prospect of meeting these two highly respected musicians, whom he had only heard about through recordings and concerts. Because it allows for instantaneous communication between the participants, with each of them dealing directly to the other, the trio formula is both dangerously and attractive. It is impossible to hide or avoid the trio formula. All tones are exposed here due to the simplicity of the instrumentation, and the lack of harmonic instruments (like guitar or piano) to flesh it all out. It is a record full of energy, contrasts, poetic and sensual-a album Colley and Stewart were fully involved in, as was Savy. Savy, a great band leader, transfigures his instrument and pushes the boundaries, exploring all nuances of writing music as well as improvisation. from http://www.beejazz.com