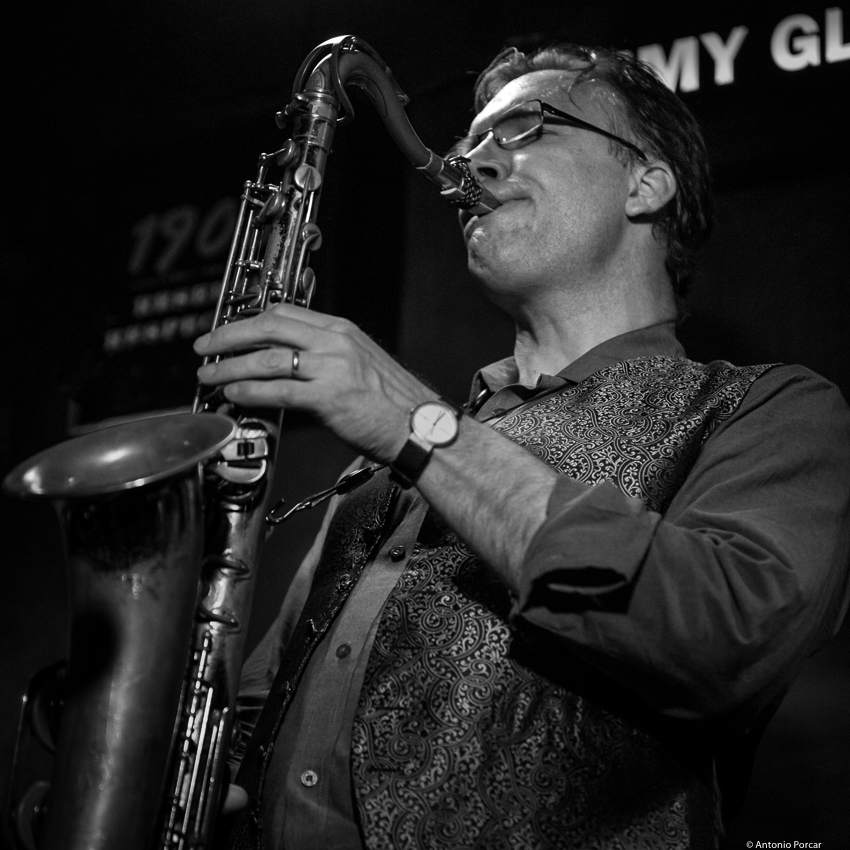 TIM ARMACOST has lived a life in constant motion. His passion for jazz is a result of the knowledge and experience he has gained. Armacost arrived in New York in 1993 and quickly established himself as a leader. His first two albums, “Fire,” (Concord), and “Live at Smalls,” (Double Time), were met with critical acclaim. His third album, “The Wishing Well” (Double Time), was a hard hitting release that announced the arrival of Armacost’s working unit. It featured Ray Drummond and Bruce Barth. After six successful European and Asian tours, the group recorded “Brightly Dark” (Satchmo Records), a second inspiring recording. Armacost’s latest release, “Rhythm and Transformation,” is available on ArtistShare 0064. The quartet is augmented by Ray Spiegel, who plays Tabla, and Eddie Henderson, who plays trumpet. Armacost has been a part of the Brooklyn Big Band since 2001, and is currently working with his quartet, Hornz in The Hood, along with Ravi Coltrane and Craig Handy. Armacost has a distinguished career that includes recording and performance credits with Al Foster, Kenny Barron and Tom Harrell. He has toured in the United States, Japan, India and East and West Europe. Armacost describes his childhood as a pendulum swing that took him from his home in Los Angeles to Tokyo and Washington D.C. At eight years old, he began his musical education in Tokyo on the clarinet. He was already playing tenor saxophone by the age of sixteen and was working in large bands throughout Washington. At the age of 18, Armacost returned to Los Angeles, where he met Charlie Shoemake and Bobby Bradford, who were his primary teachers in jazz. This was where he began his journey towards a career in jazz. They taught Armacost the basics of harmony and melody, as well as the foundations of jazz music. Sonny Rollins and Hank Mobley, John Coltrane; Charlie Parker, Ornette Coleman. Freddie Hubbard. Tom Harrell, Sonny Stitt. Pete Christlieb. Harold Land. Clifford Brown. Magna Cum Laude graduated Magnacost from Pomona College in 1985 with a major Asian Studies. Later that year, his wild spirit led him to Amsterdam, where he became a prominent figure in jazz, fluent in Dutch and the head of the Swelinck Conservatory’s saxophone section. Armacost left Europe after seven years of performing, teaching and recording experience. He then headed to India. Armacost, who had studied harmony and melody for 12 years, arrived in New Delhi to focus on rhythm. Vijay Ateet, the tabla master, was his teacher. Armacost discovered the rich rhythmic traditions of Hindustani classical music under Mr. Ateet. Armacost performed regularly with Indian classical and jazz musicians thanks to the sponsorship of Jazz India and The United States Information Service. In 1998, he returned to India to perform at the Jazz Yatra festival in Bombay. Armacost’s growth as an improviser continues to be influenced by Indian rhythmic ideas. Armacost’s compositional style has been influenced by Hindustani music, as evidenced by the recently recorded pieces “The Tabla Master”, “Indian News,” or “Afro Pentameter.” Tim Armacost has had a special relationship with Japan over the past 25 years. As an exchange student at Waseda University he learned Japanese fluently and is an active student and teacher of Japanese culture. There were performances by such great musicians like Terumasa, Motohiko Hino and Fumio Karshima as well as Fumio Ino and Fumio Tabashi, Shingo Okudaira and Benisuke Sakai and Kiyoto Fujiwara. From www.cdbaby.com