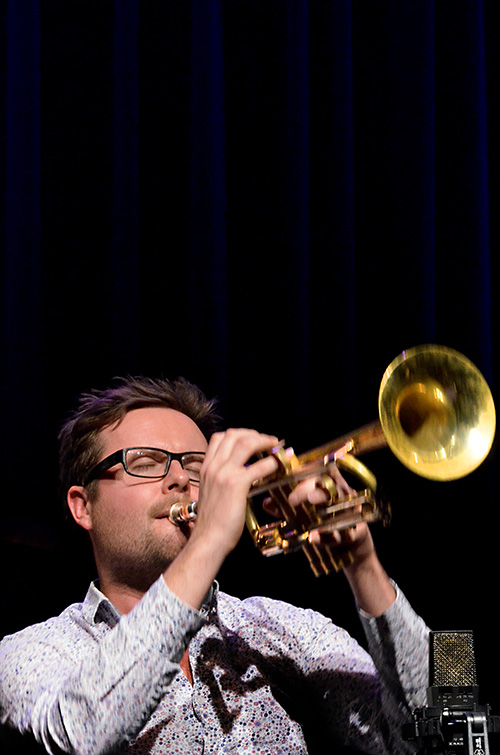 Tom Arthurs is a 21st-century trumpeter and composer, drawing freely and inexhaustibly from a wide range of influences. His music is a rare combination of beauty and creativity. He cites the inspirations of Kenny Wheeler, Jimmy Guiffre and John Taylor, South American traditional music, Berlin’s Echtzeitmusik scene, Gyorgy Ligeti and Luc Ferrari as well as Morton Feldman. Apart from music, Tarkovsky and Apichatpong Weerasethakul and Farid Uddin Attar are still deeply influential. Also, many-cherished experiences with baroque music and the pygmies in Central Africa, Gal Costa and David Sylvian, as well as music and poetry, remain deeply influenced. Arthurs’ talent, brilliant sound, and unwavering creativity are already well-known. New York City Jazz Record’s Thomas Conrad described Arthurs’ playing as “continuously and beautifully unfamiliar”. John Kelman of allaboutjazz described his improvisations with “simple, but perfect”, with a “perfecting perfection” and a tone that is as fragile as Miles Davis’s. Tom is also known as a “world-class improviser” according to UK’s Jazzwise. He has been called “une revelation” in France by Citizenjazz and “der Glasblaser (the glass-blower), by Germany’s SWR2. Tom is currently composing and leading the Tom Arthurs Trio with Markku Ounaskari, a Finnish drummer, and Richard Fairhurst, a British pianist (with whom Tom has collaborated since 2003). He can also perform enthrallingly moving solo performances and a variety of collective improvised projects, including GLUE and QUAIROS, Pedesis, as well as duos with Isambard Kharoustaliov or Simon Vincent. Arthurs has received composition commissions from BBC/RPS and BBC City of London Festival. He has also worked with BBC Concert Orchestra and Elias Quartet. Ingrid Laubrock (Kostas Theodorou), Denis Badault and Julia Hulsmann have recorded and performed with Tom. He has also shared the stage with a wide range of musicians including John Taylor, Kenny Wheeler and Jack DeJohnette. Arthurs is also a regular performer with some of the most renowned musicians his generation, including Miles Perkin (Miles Perkin), Philipp Gropper, Ronny Graupe, Wanja Slavin, and Miles Perkin. Tom was among the BBC’s first New Generation Artists in jazz from 2008-10. He also participated in Serious’ career development programs ‘Take Five Europe and ‘Take Five Europe. He has recorded for ECM and Ozella as well as Unit, Jazzwerkstatt and Creative Sources. He has performed at festivals such as Berlin, North Sea and Victoriaville, Jonquieres and Bath, Jazzd’or, Berlin and Strasbourg, London, Jazz Jantar and Jazztopad. His performances have been broadcast on the BBC, Radio France and O1 (Austria), Radio France, SWR and WDR, RBB and ARD. Tom holds a PhD from the University of Edinburgh (his work was an ethnographic approach to Berlin’s Improvised Music scene) and he has given lessons, lectures and workshops at Jazz Institut Berlin, University of Oxford, Hochschulubergreifende Zentrum Tanz Berlin (HZT/UdK), Universitat Potsdam and International Jazz Platform (Lodz). He is currently the head of the Jazz and Contemporary Music section at Bern University of the Arts in Switzerland. From www.tomarthurs.co.uk