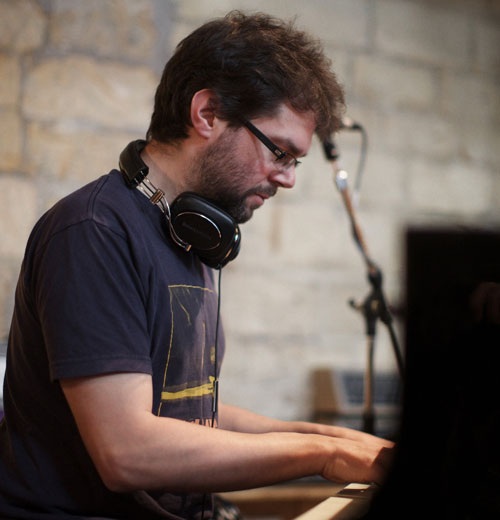 Tom Cawley is a pianist and composer who has been recording and performing with some of the most innovative and successful jazz musicians in America for more than ten years. He was awarded the Young Jazz Musician of the year award in 1998. Since then, he has performed all over the globe and led bands at Ronnie Scott’s (London) and Blue Note (New York). He has also been instrumental in the creation of the unique sound of the genre-bending icons Acoustic Ladyland. In addition to writing and arranging songs for Gwyneth Herbert’s Blue Note debut album Between Me and The Wardrobe, he is also responsible for the arrangement. His critically acclaimed band Curios was formed in 2007. It is Tom’s vehicle for original music. Hidden was a major jazz album that made an immediate impact. It won a nomination for Best Album in BBC Jazz Awards. The album also reached the top five on both the HMV Jazz Charts and Radio 3 Jazz Charts. MOJO called the album ‘an extraordinary collection, deeply personal, highly developed music’. The Independent named Hidden ‘Album Of The week’ and described it as ‘never more than spellbinding’. Musician magazine also declared Curios a shining light in British jazz. The Guardian declared that the album’s promise was proving to be a success after a long UK tour. Curios recorded in session for Jazz On 3 and were invited to perform at the new Royal Festival Hall. John Fordham put them on Jazz UK’s cover and wrote an extensive article about them. He stated, “Just when you think that EST, Brad Mehldau or The Bad Plus have taken the piano trio far, another keyboard talent opens another window.” Curios’ pianist Tom Cawley is a perfect example. Tom’s compositions are influenced by both romantic classical music and jazz. His piano playing is a reflection of many influences, including Phineas, Brad Mehldau, and others. He has composed for many kinds of ensembles, including a string quartet and a big band. His compositions have been performed in large venues like the Cardiff Millennium Hall and Royal Festival Hall. His style is unique despite his vast experience. MOJO noted while reviewing Hidden that any traces of influence are ‘overpowered by the originality of the conception, imaginative compositions, and the sheer skill in execution’. From www.ram.ac.uk