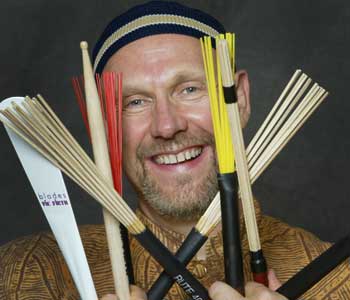 The Washington Post describes Tom Teasley as “a percussionist in the broadest and most exuberant meaning of the term.” He uses percussion instruments from Africa, India, and the Middle East. This eclectic mix of American jazz and Western Classical music has created what Bill Milkowski, a noted jazz writer, calls “a beautiful tapestry rhythm”. Tom performs regularly throughout the US and Europe. Modern Drummer magazine gave his CD, Global Groovilization, and video, Global Fusion Percussion extremely high marks. “Percussionist Tom Teasley, drummer, successfully blends rhythmic ideas from all over the globe, emphasizing the universal idea of groove. This hip West-African/Indian/Middle Eastern-influenced stew is sure to get you hooked.” (Martin Patmos – Modern Drummer). “This video challenges and inspires you to be a better drummer. This video is a great resource for both new and experienced world percussionists. Joe Morello, a legendary drummer, taught Tom for many years. Tom is a graduate of The Catholic University of America’s Master of Music program. Peabody Conservatory was where he received his Bachelor of Music degree. Tom is a versatile and skilled percussionist. He strives to expand the boundaries of musical styles and incorporate diverse influences into his music. He has a wide range of musical interests that have influenced him to seek out new sounds and combine timeless musical practices with modern influences. Tom presents “The Drum: Ancient Traditions Today” 100 times a year. This interactive performance and video release traces the history of percussion in western percussion, ethnic percussion, and electronic percussion. Tom’s voice is a unique blend of sounds from indigenous instruments like shakers, frame drums and djembe as well as traditional jazz instruments like vibraphone and drumset. Tom is a sought-after soloist and collaborator, bridging the gap between music concerts and performance art. Tom was a percussion consultant, artist collaborator, and soloist in a new millennium project by Washington’s National Symphony. “DC Citypiece”, which featured elements of hip-hop and go-go, had exotic percussion including shakers and frame drums. The documentary “DC Citypiece”, which was broadcast nationally on NPR radio, also featured a feature-length documentary. Tom was the Kreeger Museum’s artist-in residence in Washington, DC. He collaborated with a visual artist in presenting a series concert series in DC public schools. He has collaborated with Indian and American dancers. Tom is the percussionist and composer for Word-Beat. He collaborates with actor Charles Williams to present original music and spoken words in a highly acclaimed and inspiring performance. Word-Beat released a video and a CD in 1998. Poetry, Prose Percussion, Song. Word-Beat is expected to release its second CD in the fall 2005. Word-Beat is a member of the Virginia Commission for the Arts’ touring roster since 1998. As a member the United States Navy Band, he played percussion. He has played percussion and drum set for Catfish Hodge, a blues/roots artist. He’s made two recordings and toured nationally with Catfish Hodge. Tom was the subject of Modern Drummer Magazine’s feature article. It is the largest percussion magazine in circulation. He has been described as “a creative bonanza… Give Tom a bass drum drum, a drum set and a djembe.”