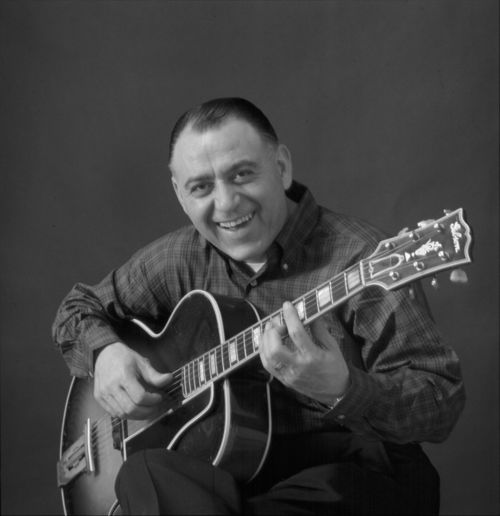 Tony Mottola, a guitarist who is best known for his extensive solo work and session work on the producer Enoch Light’s Command label and Project 3 label, was born April 18, 1918 in Kearny. At nine years old, he began to play guitar. He attended high school with Herbie Haymer, a jazz saxophonist, and George Paxton, a future bandleader. After graduating, Mottola went on tour with George Hall’s orchestra and made his recording debut on “Shine”. He was hired by CBS radio studio orchestra in 1941, where he performed behind Frank Sinatra and Raymond Scott. Mottola also supported Perry Como for many years as his accompanist. He was also recognized for his solo music score for Yul Brynner’s television series Danger. Mottola’s Command LP Mr. Big was released in 1959. When Light founded the audiophile label Project 3 (in 1965), the guitarist joined him and also served as an associate producer. Mottola was also a member of Doc Severinsen’s Orchestra, which featured on NBC’s The Tonight Show. Although Light died in 1978 and Mottola continued to support Sinatra on the road and in the studio, until 1983. He remained close to Sinatra until his retirement in 1988. Tony Mottola, who died August 9, 2004, was a member of allmusic.