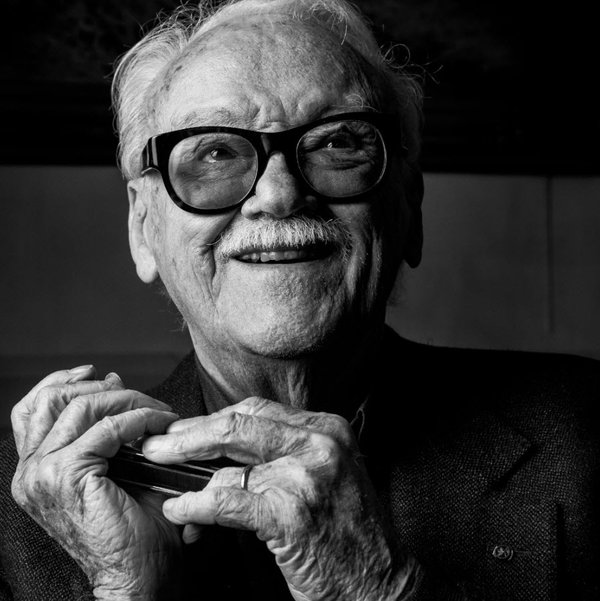 Jean-Baptiste Frederic Isidor Baron Thielemans (29 Apr 1922 – 22 Aug 2016), also known as Toots Thielemans was a Belgian jazz musician. He was well-known for his playing of the harmonica and his guitar and whistling abilities. Thielemans was born in Brussels and began his career playing guitar. He joined Sidney Bechet’s Paris jam session with Charlie Parker, Miles Davis and Max Roach in 1949. He participated in European tours in 1949 and 1950 with Benny Goodman. In Stockholm, Zoot Sims, a fellow band member, recorded his first record. He joined the band of Bobbejaan Schoepen, a singer-songwriter from his country. He was performing as a guitar player at the time. In 1952, he moved to the United States. He was a member Charlie Parker’s All-Stars. He also worked with Miles Davis as well as Dinah Washington. He was a member the George Shearing Quintet from 1952 to 1959. He played primarily guitar, but also featured on recordings and performances with his harmonica. He recorded and played with Ella Fitzgerald and Jaco Pastorius as well as Stephane Grappelli and Stephane Grappelli. Billy Eckstine also sang once (“I’m an singer”): The shadows behind your smile. Bluesette is a jazz classic by Toots Thielemans. It features Toots’s unison whistling and playing the guitar simultaneously. The song was first recorded in 1962 by Toots Thielemans, and lyrics were added by Norman Gimbel. It became a worldwide hit. He was both a bandleader as well as a sideman. This included many projects with Quincy Jones, composer/arranger. He was a part of many soundtracks to films, including Midnight Cowboy and Cinderella Liberty. He also composed the music for Dunderklumpen! (1974), a Swedish movie in which he voiced the animated character Pellegnillot. Old Spice commercials featuring his harmonica and whistling can be heard over the years. He performed in various ensembles, from duet to Word of Mouth Big Band, with Jaco Pastorius during the 1980s. He was a contributor to Billy Joel’s 1983 album An Innocent Man. His trademark harmonica can also be heard on “Leave A Tender Moment Alone.” The two of them later collaborated in concert on the selection, which was also recorded on video. He appeared on “Too Late For Goodbyes”, a Julian Lennon song, one year later. He recorded with Billy Eckstine in 1984 on his final album, I Am a Singer. It featured ballads as well as standards arranged by Angelo DiPippo. Thielemans began to explore themes that included world music in the 1990s. He released “Chez Toots”, a French-flavoured CD in 1998 that featured the Les moulins de mon coeur (“The Windmills of Your Mind”) featuring Johnny Mathis as guest singer. Thielmans was known for his kindness and modesty. Thielmans was a well-known Belgian citizen who used to refer to himself as a Brussels “ket”, which in old Brussels slang means “street child”. He was awarded a joint honorary doctorate by the Universite libre Brussel and the Vrije Universiteit Brussel. In 2001, Thielemans received the title of baron by King Albert II. He was nominated in 2005 for the title “The Greatest Belgian”. He finished 20th in the Flemish version, while he was 44th in the Walloon. He was awarded the highest honor for a jazz musician in America, the NEA Jazz Master title. He joined Philip Catherine, guitarist, on the stage at the Liberchies Church (Belgium), in commemoration of the 100th anniversary Django Reinhardt’s birth. Thielman was 90 years old in 2012. Jazz at Lincoln Center concerts celebrated the occasion with Elias and Kenny Werner, among others. He performed and then left the stage with his friends. Thielemans announced his retirement from performing due to health problems that caused show cancellations on March 12, 2014. He also cancelled all scheduled concerts. Thielemans’ manager said that Thielemans wanted to get the rest he deserved. He did however make an unannounced appearance on stage at the Jazz Middelheim Festival, Antwerp, in August 2014. Thielemans, a 94-year-old man, died in his sleep on 22 Aug 2016.