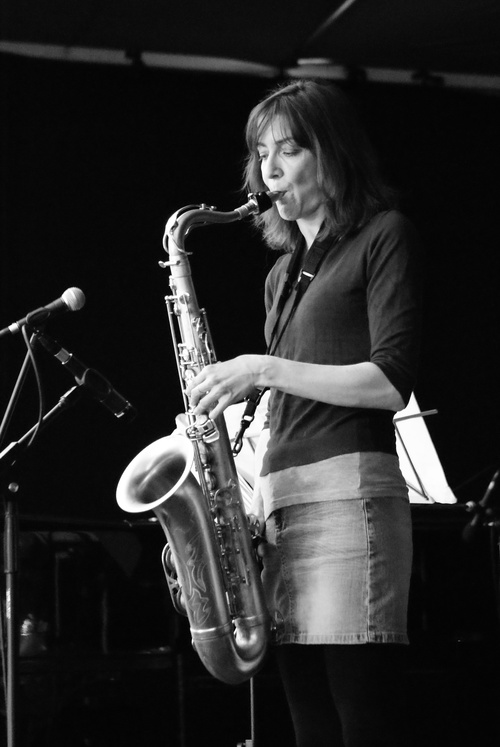 Tori Freestone, a British saxophonist/flautist and violinist, is an improvised musician who has been a prominent sidewoman and band leader in the UK. Freestone is well-known for her strong tenor sound and melodic invention, as well as her ability to blend into many styles and musical contexts. She also has a distinctive voice. Freestone is a composer whose writing blends humor with playfulness, while also exploring new ways of blurring the lines between the written/improvised. Freestone is featured in many of the UK’s most popular contemporary bands, including The Ivo Neame Quintet and Octet and Compassionate Dictatorship. Fringe Magnetic, Fringe Magnetic and Neil Yates’ N-Circle Jazz Orchestra. Solstice, Andy Sheppard and NYJO. Freestone’s trio has received the most attention lately. Freestone’s new trio, which includes long-time musical friends in the highly creative drummer Tim Giles as well as Dave Manington, is developing her own repertoire. She draws inspiration from other non-chordal saxophone led trios while exploring the flexibility of the saxophone trio. Freestone’s performances and session highlights include the Royal Festival Hall and Queen Elizabeth Hall, The 606 Club and Ronnie Scott’s Jazz Club. De Wolfe Music, SFP(USA), Soul Star Germany (Spain), Cool Sound Music Spain (Spain), United Music (NL), and VI Music (Puerto Rico) have also released her recordings. She has also taught workshops at Middlesex University and Leeds College of Music. She is currently a tutor at the National Youth Jazz Collective, where she teaches workshops and tutors on summer schools with Dave Holland and other top musicians and educators in the UK. from www.torifreestone.com