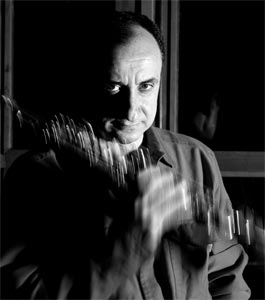 Toufic Farroukh, a saxophone player who also composes jazz with a middle eastern flavour, is a composer of jazz and has a bi-cultural heritage in Lebanon and France. His brother, who was a saxophone player himself, taught him how to play it and guided him through the process. Toufic was a novice who taught him professionalism. The Boy Scouts had introduced them to the saxophone. They found the instrument strange and unconventional. It was only used for specific occasions. Farroukh moved to Paris from Beirut. He studied music at the conservatory and the Advanced College of Music. His principal instrument was the saxophone. Farroukh did not study jazz or its roots and he never played jazz on the Saxophone. Although his first album Ali on Broadway (1994) received positive press from specialist magazines, it only reached a small portion of the French public. His second album Little Secrets (1998) features the flavour and color of the Orient amongst jazz motifs. From Wikipedia